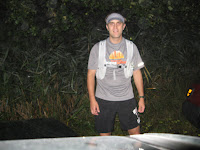 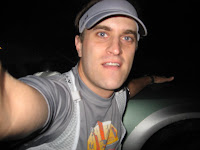 Before the Start
I snapped a couple of pictures of myself just before heading to the starting line with all my gear on.  It was about 6:15 am and still pretty dark out.  As nervous as I was at this point, I was also pretty pumped.
The Race
At approx 6:40, a nice man behind a megaphone announced "GO" and we were off.  The first half mile or so was the only real paved section of the course.  I was jogging so slow, that I was practically walking.  As much as I wanted to run, I knew that I had to be ultra conservative.  This was very tough for me.  I was watching everyone pass me, and by the time we hit the first dirt road about 1/2 mile in, there were only about 5 people behind me.  I was for all intents and purposes....dead last.
I didn't care.
I knew that 30 miles later, all those idiots who tore out of the starting line, would be hurting.  (and I was right).  My goal for this race was always to simply finish in the 12 hour limit.  The first 3-4 miles were all on dirt mountain roads....mostly flat.  I hit the first aid station around mile 4 and took a good amount of time enjoying some food and HEED drink.  I allowed myself extra time to just talk with some of the volunteers and simply take it all in.  I was distracted quite a bit with all the changing fall colors.  I eventually got going again and headed off.  It was another 4 mile or so to the next station, so I wasn't worried about water.  I popped my first salt tablet and was off.
About 50 yards from the station, the course turned onto the first single-track section.  "Here we go" I thought.  Now I was getting pumped.  People were still pretty packed together this early on, so a large "conga line" began forming of single file runners.  It was actually kind of funny.  It was right around here that I first met Tammy and Sara.  Tammy is a physical therapist and trainer, and Sara is one of her clients.  Sara had never run an ultra before, but is a ra
nked triathlete.  Tammy is an established ultra runner, but was purposely running with Sara to keep her from going out too fast.  She was monitoring her own heart rate, and keeping Sara in check.  I kept pace with them both and began talking with them about ultrarunning.  I figured if I was going to get some tips, who better to get them from than an established ultrarunner that is also a physical trainer? 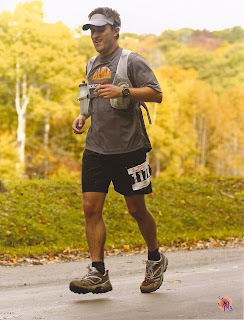 Aid stations started going by one by one, and pretty soon we were at the 26 mile station.....the Jimmy Buffett Station (affectionately named so because of the costumes and music).  At this point Tammy and I were still holding a nice comfortable pace, but we could tell Sara was itching to kick it up a notch.  Tammy told her at mile 30, she was free to go ahead.
We pushed on to the mile 30 station, and took a nice long break.  I had sent myself a drop bag and got some extra Nuun tablets and food.  Sara said goodbye and went on ahead.  She said she wanted to break 11 ho
urs.
Tammy and I walked away from the station and began our slow jog again.  By this point we had a great system down.  slow jogging on flat sections, moderate running on downhills, and quick hiking up the steep uphills.  The second half of the course was definitely nicer as far as climbs.  It seemed that there were finally some nice long flat sections that were mostly single track.
Once we got to around mile 35 I started noticing that we were literally all alone.  As far back as I could see, and as far forward as I could see....it was nothing by forest. It was kind of spooky.  It was literally just the two of us, in the middle of nowhere Vermont....A feeling that one can never get in a road marathon. 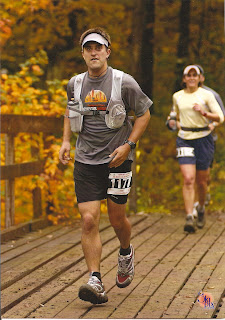 Something else dawned on me at this point in the race.  The longest day I ever had on the Appalachian Trail was 35 miles.  I had now officially moved, under my own power, farther in a single day than I ever have in my life.  It was a pretty humbling thought....but it also made me feel pretty darn good.  Pretty good accomplishment, I thought....even if I don't finish.We passed two more aid stations and finally rolled into the last station at around mile 46.  It was 4 miles to the finish line and I was completely out of gas.  I told tammy that I didn't think I could stay with her anymore.  I figured at this point, even if I walked the last 4 miles I would just finish in under 12 hours.  She told me that the last section had a lot of climbs and that she'd be walking a lot anyway.
We started off together walking the uphill out of the station.  About a mile later it flattened out and we started a very slow jog.  I was able to hang with her, but it was really hurting.  I stopped with all conversation at this point, because I was so absolutely exhausted.  With 2 miles to go, a huge thunderstorm opened up and it rained hard for about 10 minutes.  Of course....Murphy's law.   I didn't mind the rain...in fact I quite liked it.  The problem was, that for an already beat up course (from the moutain bikes), the rain turned the last 2 miles into straight up mud.  We tried to run the mile from 48-49, but couldn't because we kept slipping and falling.
We rounded a turn and the trail finally became runnable again just as we saw a sign that said "Grace's Hill - 1 Mile to Go".  I looked at my watch and saw that we were just at a little over 11 hours.  I knew at this point that I was going to finish.  We made the final climb up Grace's Hill and Tammy told me that the last 3/4 of a mile were all flat and downhill....so with the last little bit of energy I had, I mustered up one last little jog to keep up with her.
As we rounded the last turn under the ski lifts, I could see the finish line and I felt an immense adrenaline rush.  Tammy looked at me and said, "go ahead and finish in front of me so that you can get a good photo finish".  I told her that there's no way in hell that I was going to have her let me finish first.  I slowed up and insisted that she finish first.  After all the help she gave me with keeping myself paced...it was the least I could do.  Besides, her husband was waiting at the finish line and I wanted to make sure I was far enough back so that he could get a good picture of her sprinting the last 50 yards.
I turned around just as she was crossing the line and noticed that someone had finally caught up to me and was only about 20 feet behind me.  I put my last bit of kick on and crossed the line in 11 hrs 18 minutes with my arms stretched to the sky screaming like a school kid.
I got my medal, walked over and thanked Tammy and saw Sara who was also waiting for us. Turns out she finished in 10 hrs 45 minutes (Over a half an hour ahead of us).  I hobbled my way over to the food tent and ate two platefuls of pasta and simply sat down for a good 30 minutes.
I made my way up to my car, took a few last minute victory photos, and hit the free showers before heading home.  All in all, it was an amazing experience.  The course was amazing, the fall colors indescribable, and the people incredible.  I will be doing many a
trail run in the future that is for sure (including the Vermont 50 again next year!) 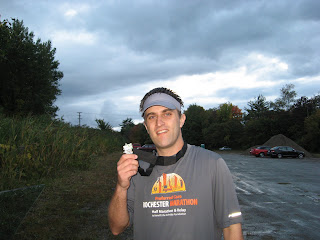 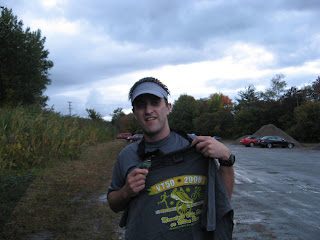 I just found your blog and put it into my bloglines, so I will be updated with each post! Anxiously looking forward to some more!

I am glad you put a narrative of your 50 miler! It sounded amazing, and I am sure it helped that you had ran 2 marathons and also hiked 35 miles in one day on the AT...but of course you had a full backpack too!

Talk to you later!