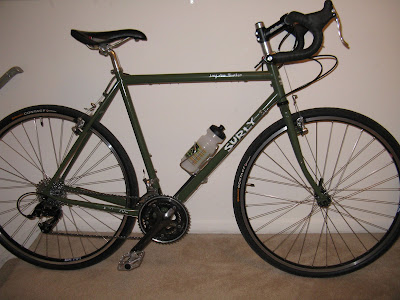 The new toy - surly: long haul trucker
Spring is upon us and I am trying desperately to keep my mind far from thoughts of long, winding, dirt-covered trails.   It is much easier said than done though, as it was exactly one year ago that I posted the following over on my PCT trailjournal:

So...I'm trying to focus on the year to come.  Every year I try to put forth a challenge of some kind to myself...something new, something different.  It seems that each year, my goal gets more intense, more extreme, and some might even argue...more crazy.  Well, I can safely say that I am toying around with a couple of ideas this year, and whatever I do decide on, it will most likely focus more on being different, and not so much being more extreme.  I am sort of thinking of it as a step-back year.

But in trying to keep my adventurous spirit alive and burning, I often come back to various quotes that have for some reason or another left an imprint on me.  Today I think of a quote from Chris McCandless.  Regardless of your opinion of him, the quote should speak to us all.  Since making the decision to start my life over in 2006, I often come back to this one....

“So many people live within unhappy circumstances and yet will not take the initiative to change their situation because they are conditioned to a life of security, conformity, and conservatism; all of which may appear to give one peace of mind, but in reality nothing is more dangerous to the adventurous spirit within a man than a secure future. The very basic core of a man’s living spirit is his passion for adventure. The joy of life comes from our encounters with new experiences, and hence there is no greater joy than to have an endlessly changing horizon, for each day to have a new and different sun.” - McCandless

I can say this.  With the PCT all but a blur in my memory banks now, it is time for me to steer my focus back to staying in shape with the running.  With the exception of a little running last spring and a few outings in the fall, 2010 was fairly devoid of running for me.  After having completed both the Vermont 100 and Leadville 100 in 2009 (as well as the VT 50, FL50, Pocono and Rochester Marathons), I shifted to hiking in 2010 with the PCT.  I did try to get in to a few races, but wasn't chosen for any lotteries.  Now, with no recent ultras under my belt in over a year, I don't qualify for most big races this year (with a few exceptions).   So...time to reboot.  Since getting back from the ice, I've begun my usual marathon training program, but this time, I'm trying the intermediate level program as opposed to the novice.  It has me running 5 days a week, and cross training on one day, with only a single rest day.  It is a feisty program, but for the first time since getting back, I am starting to feel in shape again....(despite some bizarre recently-developed minor back pain - I know...weird).  I am focusing a lot on my diet too.  Been trying to stick to smaller and healthier portions, with much less processed food and preservatives.

So in the short term, I will again be running the Pocono Marathon in May as well as the Finger Lakes 50 in July.  This should get me back up to ultra shape again for some possible bigger races this summer.  My schoolwork will again have me spending some time out in Colorado, so I will certainly make use of my time there with as much hiking as possible.  If the timing is right, I might finally make another appearance at the Estes Park Half-Marathon again.

Anyway...I guess the biggest news recently is the addition of my lovely new form of transportation.  For a very long time now I wanted a solid, steel, touring-style bike...with the ability to also do some cross riding on fire trails.  I test drove several bikes, but kept coming back to the Surly.  Rather than buying a factory model, I bought a custom built Trucker with all sorts of really nice upgrades (the biggest being the wheels and the drive train).

Tonight I went out for a nice 13 miler.  It was cool, yet sunny...and Spring was truly in the air.  I went along a nice country road along a corn field with one eye constantly on the Tussey Ridgeline.  Any other time in the past 3 years this statement would seem normal.  What makes it so different this time, is that I was on a bike.  And it was great.  I think I'm going to enjoy Cross-Training Mondays. 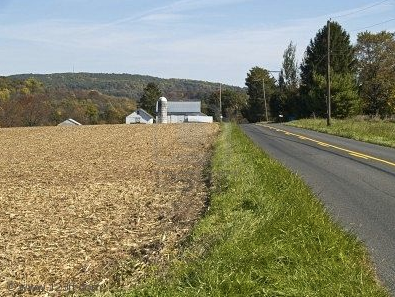 Oh and as soon as I figure out what I'm doing this summer, I'll be sure to post something up here.  It may involve running, biking, or even kayaking...or a combination.  I will put this out there now though...anyone out there feel like pacing this summer?  There would be free beer involved.....
Posted by Lakewood at 7:59 PM

Congrats on the Bike John!

Love the sentiments from Supertramp. For me, it's actually more work to keep the adventures coming than it is to actually do them. Creating the time off and saving the money for a long hike is hard stuff, but so worth it.

I'll keep my eye on your updates. Keep on rocking!
-Guthook