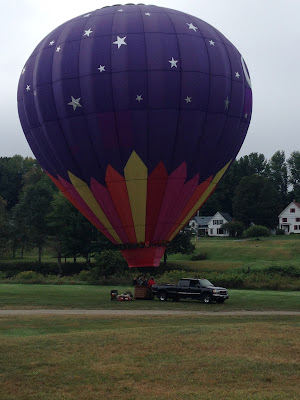 The view from out my window...

To say it's been a bit of a whirlwind past few months would be a bit of an understatement.  I find myself slowly easing into my new situation though, and even, dare I say, settling in.  I now split my time between to places in New England, one in Vermont, and one in Massachusetts (2 hours apart).  Despite the obvious downside to such a living arrangement, I take solace in the fact that it will soon get better, and that I've managed to focus on the positives.  Both of my new homes are lovely and have their own personalities.

What can I say thus far living in New England for 2+ months?  Well, honestly, it's an odd place.....but I love it.  Personalities and behaviors are widely-varying and unique here, but for the most part, people are extremely open-minded and personable.  What I found most interesting is that I spend most of my time actually in New Hampshire (where my job is),  but live in Vermont and Massachusetts.  The apartment in VT is lovely.  Tucked away in an idyllic and rather cliche' VT rolling valley surrounded by beautiful mountains.  There are great running trails, even better geology, and there's even a covered bridge 1/2 mile from home.  It is absolutely calming and wonderful there.  Vermonters are an interesting breed.  It is one of the most progressive/liberal states in the US and it shows.  There are more hybrid cars and farmers markets than I've ever seen.....and people are incredibly open-minded and welcoming.  With that said, I sometimes catch a hint of smugness, and self-rightousness from people.  All in all though, I've never felt more "at home" than I do in VT.

But then something interesting happens when I drive 4 miles down the road.  I cross into New Hampshire, the self-described "Live Free or Die" state.  New Hampshire is ridiculously Libertarian and for what I thought was a classic "New England Liberal State", there is more anti-government sentiment there than what I saw in rural parts of Pennsylvania.  It's actually quite fascinating.  Weekend talk radio is littered with shows about guns, liberties, and the constitution.   They don't even have income or sales taxes (which is of course why I buy all of my goods and groceries in NH and not VT or MA!).  For two places that are so close geographically, the mindsets of the people are palpably different.  Of course at the College (Dartmouth), it feels just like any typical campus (although a bit privileged and Ivy League-y).

And then there's Massachusetts.  Due to my work and/or personal arrangements, I spend a good part of my time outside of Boston as well.  For a big city, Boston is fantastic.  A fair amount smaller than a NYC, but just as diverse and cultured.  The downside?  The zoning, roads, and traffic.  For all of the wonderful merit to Boston as a city, and for all it offers, it loses a lot simply in the layout of it's infrastructure.  Roads are a disaster, public transportation is sparse, unreliable, and slow, and the commuter rails extremely expensive.  Commuting downtown from anywhere outside of walking distance is a major chore and I think at the root of why many people in the city seem so impatient, on-edge, and downright cranky.  I know I'd be if I had to do that commute every day.

With all of this said, I have definitely had a fun few months and packed it with many adventures (including my little 100 mile cycling romp last weekend).  I've already taken a few trips, and managed to discover a nice network of trails to run on in VT.

I figure I'd just go through a pictoral run-through of some of the past few months highlights.... 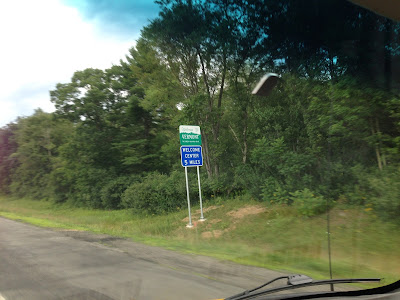 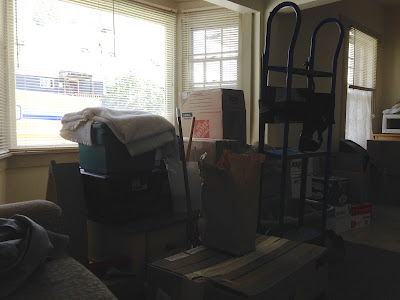 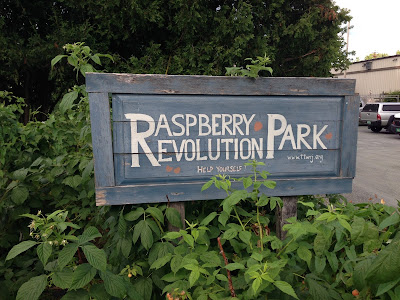 In classic VT fashion, a local park is also a "help yourself" raspberry park. 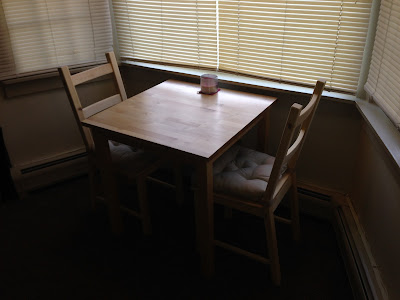 A real breakfast nook in the new place.  Always wanted one of these. 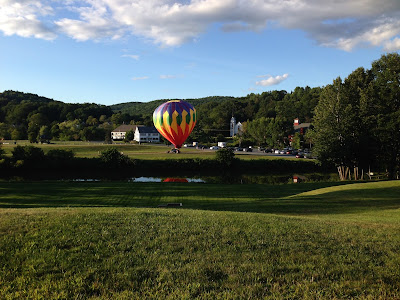 This happens almost nightly in the field across from the apartment

After getting unpacked and ready for my new job to start, I had a major blowup with my primary laptop.  The machine that got me through the last 5 years of graduate school, and housed all of my PhD dissertation material, suddenly did this....

After many hours of troubleshooting, a send-in to apple, and a new logic board, it was brought back from the dead, but not after first having to troubleshoot a new video problem (See below).  Turns out, they gave me a logic board with a newer video processor, but my OS still had the old drivers running.  After re-installing OSX, all was well, and crises were averted.  Needless to say I have 3 separate back ups of my system/data now. 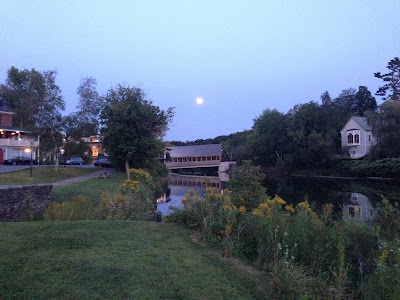 Another view from the near the new Apt

One of the first things I did up in VT, was to establish new daily running routes.  I quickly found several local trails and an entire network of cross country ski trails that serve as running paths in the warmer months.  It didn't take long to explore them all.... 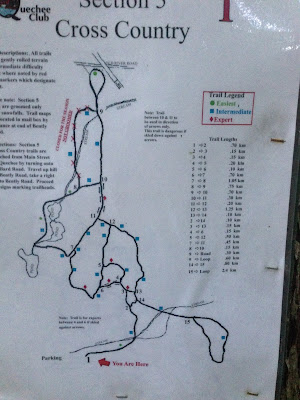 Trail map of all cross-country trails... 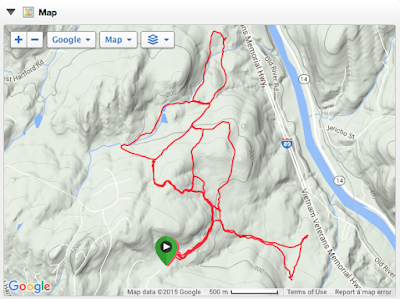 My actual GPS track of all of these trails

A few weeks into my new job, I had to return to Penn State to work on some sensors.  The trip went well, but I quickly realized just how far away I now was from Central PA.  Any future trips to State College will mean almost 1000 miles round trip in a car. 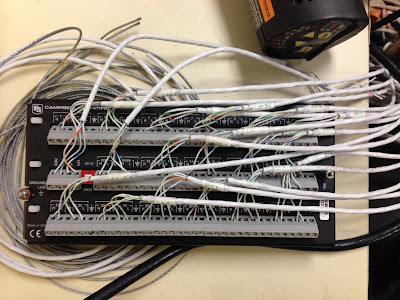 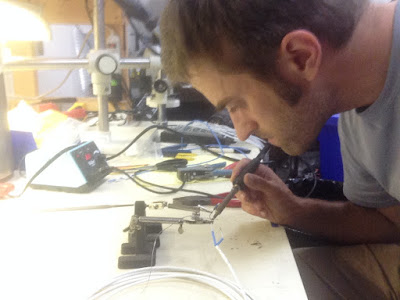 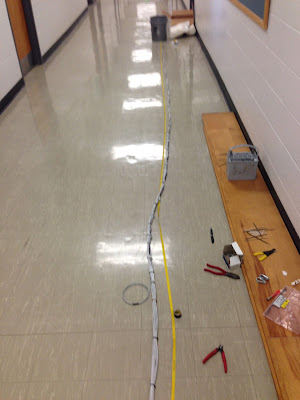 The Boston move-in was a little more chaotic, but has been equally exciting.  There are so many fun places to explore in the area.  One of the very first things we did once settled was to take a trip out along the coast and up around Cape Cod to Provincetown.  It's one of those oddball extreme places I've always wanted to explore.  Plus I've heard that Provincetown is basically the Key West of the North (and Key West was pretty darn fun/crazy when I visited it 10+ years ago) 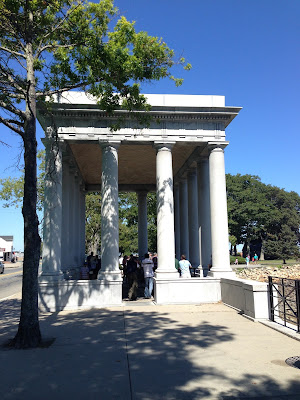 On our way out to the Cape, we stopped for a visit at Plymouth Rock 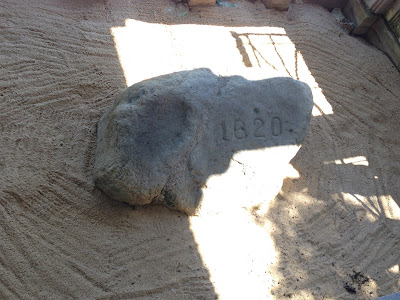 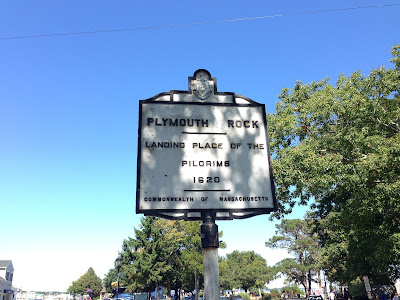 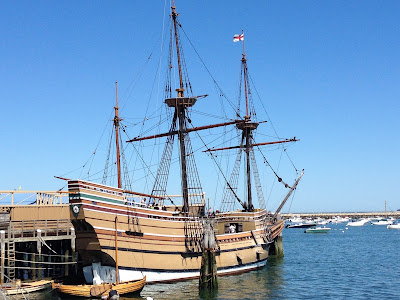 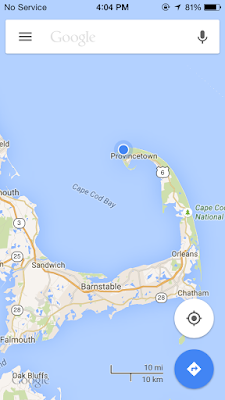 Screenshot of GPS dot way out at tip of Cape Cod 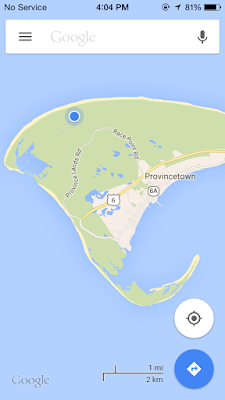 Furthest we went on our bikes
(We brought our bikes with us to ride around on
in Provincetown, since we knew driving is difficult). 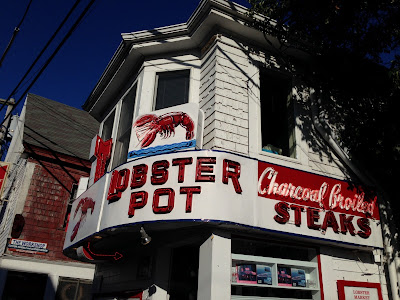 Dinner at the Lobster Pot. 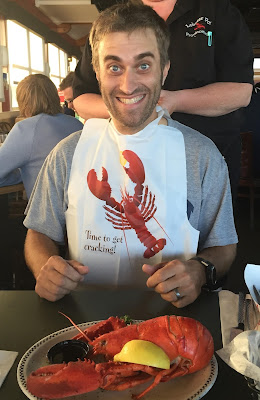 Time to get crackin'. 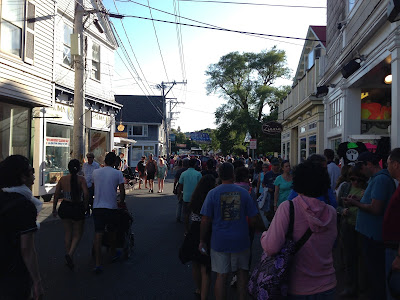 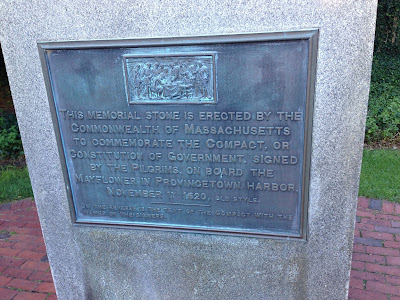 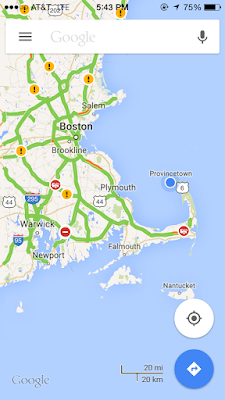 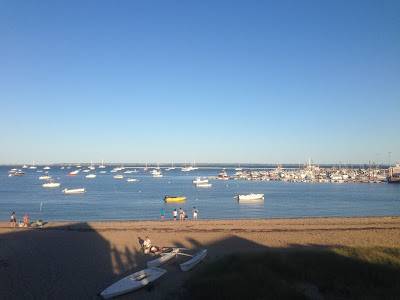 Later in the week we went out exploring and found this lovely example of glacial striae on an exposed boulder near our apartment (the vertical scratch marks).  Gotta love ice-related goodies from the last ice age. 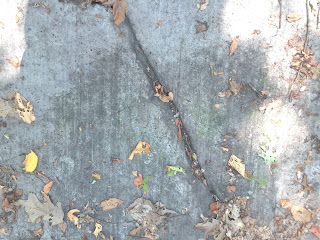 In late-September, I went for what would be the last WAIS Divide project meeting in San Diego.  I've been going to these meetings for the past 7 years and have enjoyed the science exchanges that have happened each time.  It would be the last time I'd see many of the project participants for a while, so I was glad my job allowed me to still go. 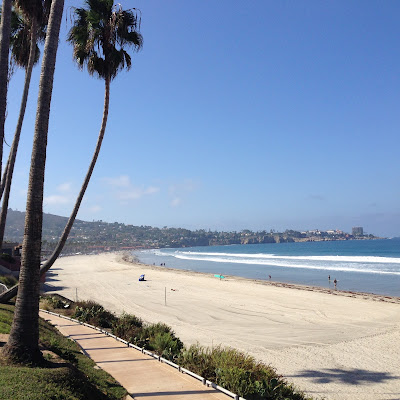 The beach in La Jolla, quite a nice little place for a meeting. 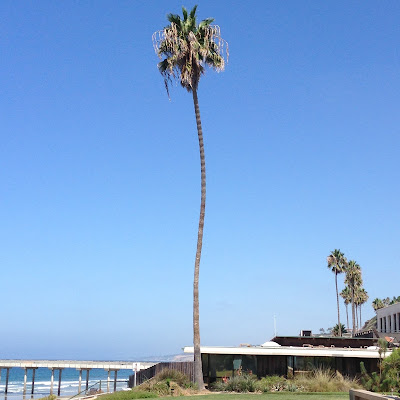 I thought this tree looked straight out of Dr. Seuss.


It's weird to think that life is settling down a little, and things are becoming a bit more regular.  This doesn't mean I won't stop exploring though....as there's still so much to do, so many places yet to see, and so many nooks and crannies yet to peek behind....not to mention all the adventures yet to unfold.

Keep on trekin' everyone...and always take the time to peek under that goofy looking rock.