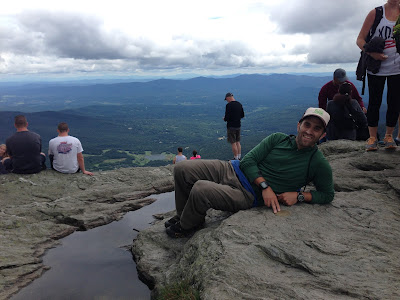 Amidst my list of big-ticket bucket list items, I have sprinkled in quite a few mini-projects. These are the sort of goofy trips, hikes, or runs, that don't take too much planning or time off of work...but nonetheless still get me quite excited. There's usually some kind of geography or exploration theme to these mini-endeavors, but most I would say could be completed in a day (or at most a weekend). An example would be my drive to Province Point many years ago, or even my long weekend trip to Nunavut last year.

One of the first things I did after "partially" moving to Vermont in 2015, was to tag the high point at Mt. Mansfield. I am in the process of collecting state high points and only have about 10 left.  Mansfield was on my to-do list for some time, and with a trip back up to Stowe and the Ben and Jerry's factory already scheduled, it seemed a no-brainer to also tag Mansfield.

After that fun day up and down the mountain, I realized something somewhat unique to Vermont.  I'm sure there's a website out there that has all of the specific numbers, but what I noticed about Vermont was that you could connect the state High Point (Mansfield) to the state Low Point (Lake Champlain) with only a mere ~26 miles of road and trail. Hence:

Immediately upon seeing this I thought how fun it would be to run from Vermont's high point to low point in one go. I figured it would only take about 6 hours of moderately-paced running/hiking. I imagine there are some states that have closer high/low points: like maybe Delaware, or Minnesota, or Michigan. For me though, Vermont seemed like the best overall example.  Here you have a state with a respectable high point (~4400'), with some gnarly and technical trails to reach it (the Long Trail is notoriously feisty near Mansfield)....and you have an approximate marathon distance to the low point at Lake Champlain---which is also conveniently located in downtown Burlington (a super fun and hip little town).  Add to that the opportunity to run through rural Vermont and a trip to the Ben and Jerry's factory post-run, and I don't see how any other state can compete for high-low run for a "quick" mini-project.  I suppose if you had more time, then yes...a journey run from Mt. Whitney to the ocean in California would be quite spectacular (although you'd have to get permits for that). Similarly, I imagine a long trek across Colorado from Elbert to the Kansas border might be fun too. For me though, I wanted something that I could do on a whim, and would take only a few hours, but still reward me with some fantastic hiking, some killer views, and some solid running through the countryside, all with a memorable finish line.

Before heading back to my full time job after my Summer research at the ice lab, I found myself with a few days to kill. I toyed around with some different ideas of things to do, but settled on finally tackling this fun little project. One of the reasons it's taken so long to do what would seem on paper to be a relatively short and easy mini-trip are the logistics of the start/finish. Because it's a point to point course, doing this trip alone would require staging a bike at the finish or arranging someone to pick me up.  Well thankfully, C decided to come along for this trip and was therefore able to drop me off at the start and pick me up at the finish. This meant I could knock out my ~6 hours of hiking/running, all while she spent some time in Burlington working at a cafe' or simply enjoying the town.  We ended up making it a 2-day affair and had some fun around the area. On the first day, we took a gondola ride up Mansfield, hiked up to Sterling Pond along the Long Trail, and spent a day just mulling around Stowe. The next morning She dropped me off at Smuggler's Notch and I began my adventure.

One side comment. Obviously it's impossible to magically just start on top of Mt. Mansfield, so I opted to hike to the summit via the Long Trail from Smuggler's Notch. This is one of the longest sustained climbs on the the Long Trail with the most elevation gain (almost 3000 feet). I suppose I could have taken the Gondola back up and hiked the short bit to the summit, but that just didn't seem right. So...what this meant is that the entire adventure would be closer to 28 miles, including about 2 miles of approach up to the "Start Line" on the summit of Mt. Mansfield.

I started about 9 am, and the hike up the 2 miles along the Long Trail were tough. The LT is known for being notoriously difficult in the northern section (North of the AT split off), and it really is no joke. The trail tread is rocky and technical, and often you will find yourself traversing steep, wet rock. There are even a few places where you actually have to climb up through steep rock faces. Nothing over class 3, but can be quite a shocker if you are expecting it.

Still, it was fun to "earn" my Start Line. I loved that I got to play on some of the most difficult miles of the LT before even starting my adventure. I was worried about rain as the forecast was for 60% chance....but my entire hike up to the summit was essentially dry. above 3500 feet I was in a very wet and cold cloud of moisture, but it never rained on me.  At the top I was greeted by the Mt. Mansfield summit steward who told me it had been a very quiet morning. I was only the 4th person he'd seen (and it was already about 10 am). It took me exactly 1 hour to hike the approach up to the summit. 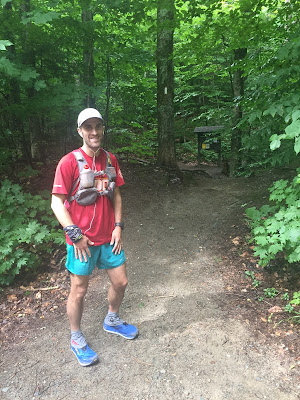 At the trail head at Smuggler's Notch around 9:00 am 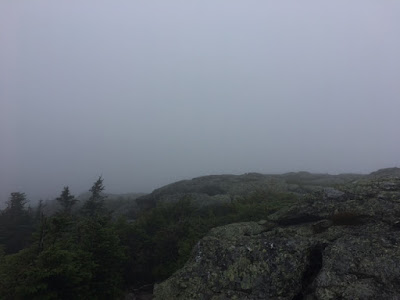 Arriving at the Summit inside a cloud 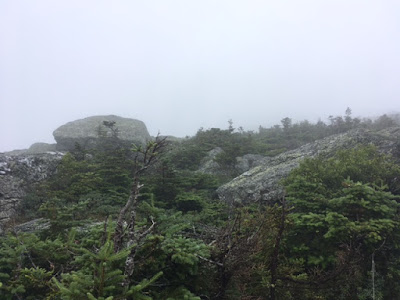 Another view near the summit

Here are a few pictures from near the Summit that I took back in 2015 that show a bit more of the area. I only took a couple of low-visibility pics on my high-low hike/run last weekend. 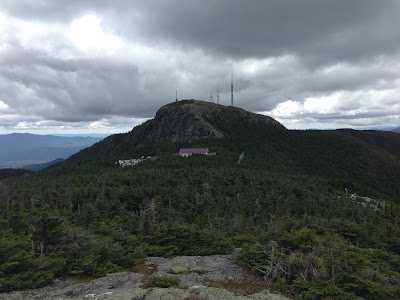 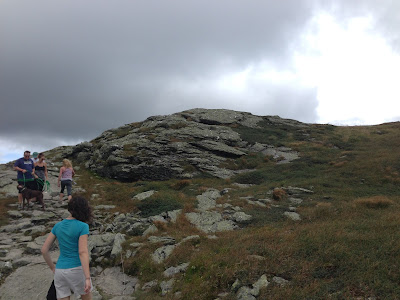 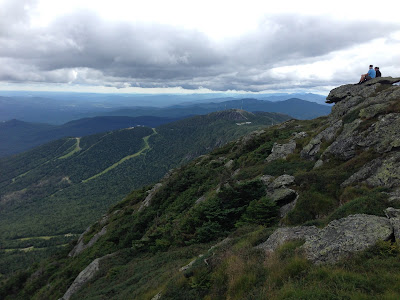 Some hikers enjoying the high point (2015) 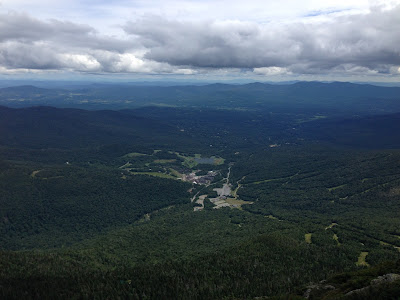 Looking down at the ski lodge several thousand feet down. (2015)

I started my descent after a short food/hydration break...and after a nice chat with the steward. My route would take me down the Sunset Ridge trail to the several-mile-long Western Approach road (dirt) appropriately named "Mountain Road". From there, the route would take a relatively direct line towards Burlington following several rural state routes and roads...passing through many little towns along the way (Underhill, Jericho, Essex, Winooski, etc).  Below you can see my actual full route: 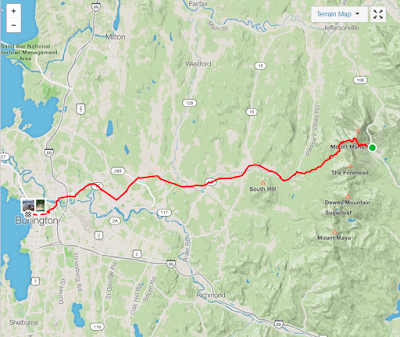 The descent was slow and technical, but by the time I popped out on the trailhead and began down the dirt Mountain Road, I was actually running. I made quick work of those 4-5 miles and before long was out on a rural paved road...with not much shoulder. Thankfully traffic was very light and I just began plugging along. It actually reminded me a lot of Vol State. Long straight rural roads, high humidity, and pounding pavement. I loved every second of it. The small towns were conveniently spaced such that I had a nice milestone to aim for every 5-6 miles or so.  I passed covered bridges, old mills, quaint/rustic houses, and even a llama farm. It did rain on me for a few miles, but nothing terrible. I actually preferred the cloud cover and rain to a hot sun.

When I did finally make it into Essex, the sun finally started peeking its way out and it was less-than-pleasant. With the high humidity, it really was reminiscent of Vol State. I made a pit stop into a gas station and drank an entire gatorade in true Vol State fashion. I called C to relay to her that my phone was telling me 6 miles to Burlington...and she was watching along my SPOT tracker (a new purchase that was now paying for itself).

I slowed my pace, and even walked a bit as I worked through Essex and on to Winooski before finally arriving at the outskirts of Burlington. It was fun knowing that I was running towards a tangible finish...touching the water of Lake Champlain. Sort of like reaching the rock at Vol State, every step I took, I knew I was getting closer to the water.

I arrived at the UVM campus about 2 miles from the finish and navigated my way through the walkways and past a couple of fountains. I finally popped out at the end of College St. and had one last stretch down to the water. C had known of my location and surprised me along the road for a couple of candid shots. I ran past her and made my way through the very busy/bustling downtown towards the boat dock.

When I finally made it, I sat down on a flat rock by the water, chugged the rest of my gatorade, and happily dipped my finger into Lake Champlain. In total the run took me just a smidge over 6 hours (a bit slower than I had originally hoped, but I was totally fine with it).

It really was a nice mini-adventure. Even though it was only 6 hours long, I really enjoyed the time out there on the trails and roads to just let my mind wander a bit. It was a great way to mentally reset before heading back to my full time job. There something so simple yet therapeutic about just making simple miles along simple roads. It's hard to explain, but anyone that's done any sort of journey run understands (particularly the Vol Staters out there). This trip was everything I was hoping it would be and I was so glad I finally was able to find a day to do it.

We stopped at Ben and Jerry's on the way home and had a glorious helping of ice cream, and then at the Alchemist brewery for a very special Paddy's Porter....a perfect end to a great day. Thanks C for being my personal Uber driver for this little mini-trip.

In total my Garmin clocked just under 29 miles...but that's including a few walk-around breaks, and a couple of spots where I had to back track a little. Below is a link to the full run on Strava. 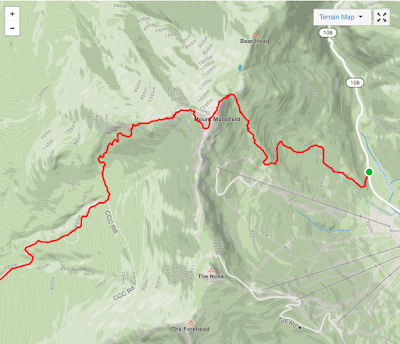 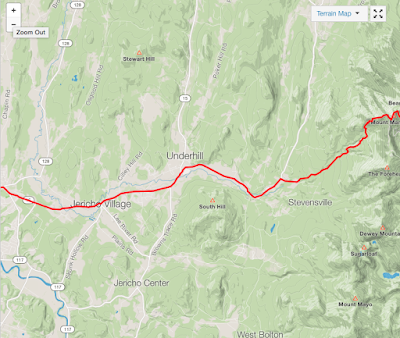 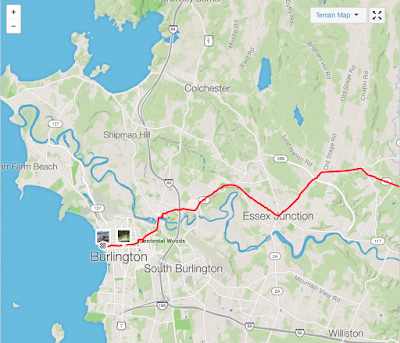 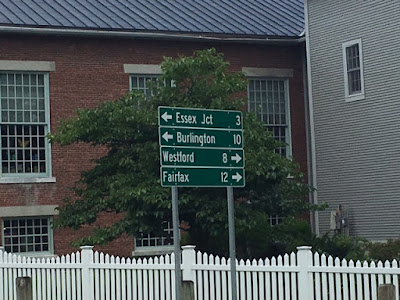 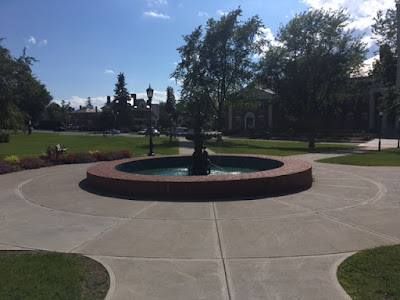 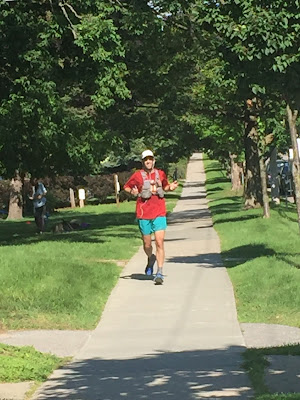 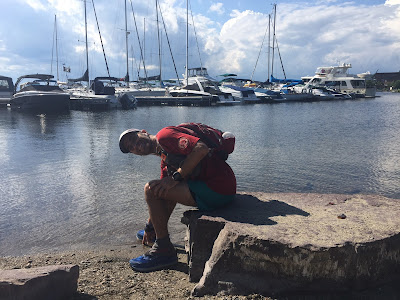 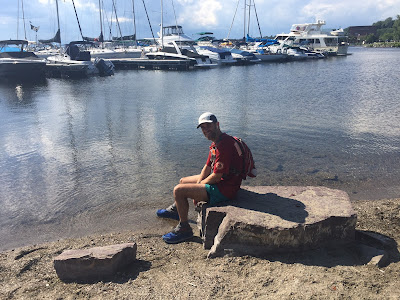 Elevation Profile for the entire trip.