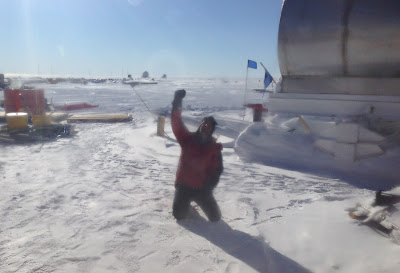 Before writing up my annual year-in-review entry, I thought I'd post something light before the Holidays. I was going through a stack of old papers and came across a folder from early 2016 that contained all of my paperwork related to my Antarctic deployment from Dec. 2015 through Jan 2016. That year I was lucky enough to have been asked to participate in the South Pole Ice coring project, and managed to finally achieve a 39-year goal of mine: To stand on the very bottom of the world, and have every other human being stand North of me. I've written about this deployment on many occasions and wont focus on that in this short post.
This post instead will focus on a rather ridiculous idea I had while sitting in the cafeteria one day before my ice-coring shift started. The idea was very simple: To run an actual ultramarathon at the South Pole. I had spent about an hour on station surfing the internet during the short window that the satellite was up...and was unable to find a single instance of someone actually running an ultra at Pole. Sure, there were many who have traversed the entirety of Antarctica, or skied thousands of miles to the Pole...and even those every year that run the South Pole Marathon. But in all my searching, I could not find a record of someone setting out to run an actual ultra distance at Pole and then documenting it. With this said, there are several ultras that are run in Antarctica, just not at Pole.

An interesting side story: In 2011, I was stationed at a tourist camp in Antarctica called Union Glacier. While there, I was actually invited to run the 100k event that was being put on there. Dozens of tourists from around the world had flown to the station to run this event, and I was simply there to work on some remote seismic stations related to an NSF project. But I gladly accepted and was eager to take a stab at the 100k. Unfortunately, the plane bringing my group back to McMurdo station came the next morning (a day early) and I missed the race. I do still have my bib number though, as well as the official race shirt.

In late December of 2015, I arrived at South Pole for a month long deployment. I would be working long shifts, 6 days a week...drilling and logging cores related to the "Spicecore" project. We were drilling to a depth of 1750 meters below the surface.

Christmas came just a few days after arriving, and a tradition at pole is that the entire station does a "run around the world". This "race" constitutes the majority of personnel on station dressing up in silly costumes, and then running/walking a ~2 mile loop around the station. This loop circumnavigates the geographical pole, so everyone who completes the run, does in fact run "around the world", and  through every line of longitude (and every time zone). It's a silly tradition, but a lot of fun. Most who run, go very slowly...but there are a few that race it hard. That year, we had three very fast runners in camp. One of the carpenters, Curtis, was a 2:40 marathoner. I did my best to race as hard as I could, but with the 10,000 foot altitude, cold temps, and heavy layers, I managed to only place 5th. Still, I had a blast. 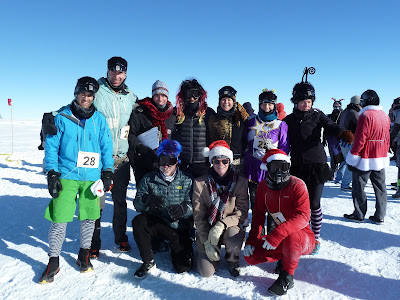 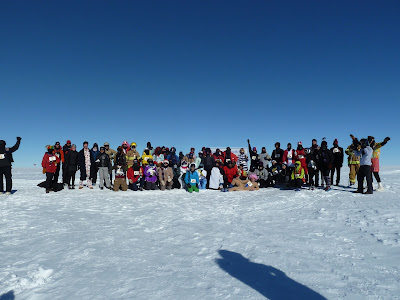 All of the Round-the-world runners

A week later, I was in much better shape. I had acclimated to the cold and altitude, and had been running regularly on the station treadmill. I had known for years that there was an annual sanctioned Marathon that took place in McMurdo Station. On any given year, there could be up to 50 runners attempting this. I had always wanted to participate, but every time I had ever been through McMurdo, it was never during New Years Day when the race actually occurs. BUT...what I came to learn at South Pole, was despite the much lower number of residents (~150 total), and the MUCH colder temps, there are those on station at Pole that always miss this marathon as well. So some years back, a few of the workers at Pole decided to run their own Marathon at the same time as the McMurdo marathon. Ever since then, it has become an annual event. Generally at Pole, there are roughly 3-5 finishers per year (although some people will ski the course as well). Once I heard about this, I knew I had to do it.

The weather forecast for the marathon was absolute crap. Blistering temps (-40C), and horrible winds. The wind chill was in the -50's. This meant, even with all of my protective layers, I would have to stop in the stationed "warming huts" periodically to warm up. I knew any finish would be slow. I didn't care about time honestly though, and simply wanted to complete a marathon in Antarctica. So, on New Years holiday, I went out with about 15 others and started the marathon. It was a slow slog, often directly into the wind, and involved completing several loops. I was in 2nd place for most of the event (behind Curtis), but in the last 5 miles fell back to 4th. I finished in a smidge over 5 hours, but with almost an hour of warming breaks (about 4hrs 30 mins of actual running time). It was actually a lot more fun that I thought it would be....which is how I thought up the idea of the ultra. 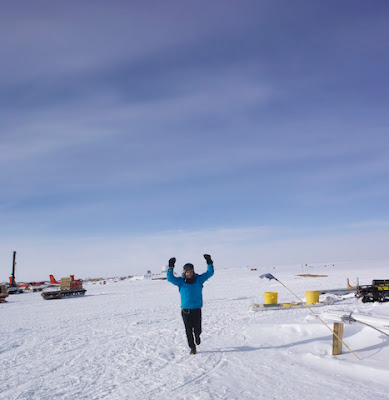 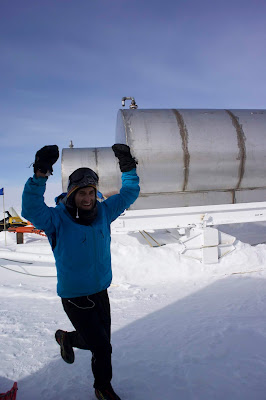 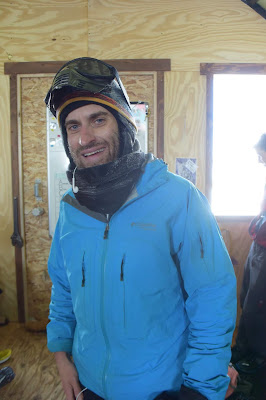 
As the thrill of the Marathon wore off, and we all went back to normal work shifts the next day, I started thinking about a South Pole Ultra. Was one ever completed before? Had anyone ever attempted one? All of my research led me to dead ends. I was not able to find any solid evidence of a successful South Pole Ultramarathon attempt or completion.

So....knowing this might be my only time ever at South Pole Station....I knew it would be my only chance to set the bar. I started my planning a few nights later after my work shift. I went out for a short run down and back on the station skiway (the "runway" for the plane) and realized that if a made a loop out of it, I could make it exactly 5 miles. This also meant I could attempt a 50-miler by doing 10 laps.  I figured to be a truly legitimate "Ultra", I had to at least attempt 50 miles, if not 100k. My declared goal was actually to do a 100k comprised of 12 full loops, and a small 2-mile short loop to finish it off. I planned out my list with 13 check-boxes to use as a tally between loops. The beauty of the 5 mile loop down the skiway, was that I could use one of the station huts on the loop every 5 miles to warm up. This hut, known as the "chapel", was actually a small workshop that the fuelies use...so it did stink of jet fuel though.

A bonus of using the skiway was that the surface was more groomed, meaning better footing. It would still be crunchy and difficult, but not like running on fresh Antarctic snow. The down side, is that the skiway is active. I had to do this attempt on a day with no flights scheduled. The only day that this is the case, are the Sundays...which also happens to be our day off. So...if I were to attempt this, I would be using my one off-shift, to run for what would likely be at least 12 hours. This wasn't an issue for me, as I had convinced myself that I had to go for it. What I came to learn during my attempt was that while Sundays are off days for the larger LC130 flights, the small Twin Otter planes do still fly. So during my 7th loop, I was forced to run a single alternate 5-mile out-n-back out the ice-coring site while Twin Otter was taking off.

I had thought about spelling out the entire experience in a text run report in this entry, but I realized that I recorded videos of myself during warm up breaks. So, instead of boring text, I'm just going to post the video detailing the entire experience. It's almost all talking from the warming hut as my camera wouldn't stay charged in the cold.

The end result? I completed the 50 miles and decided that was enough. I was indeed the first to complete an official ultramarathon at South Pole Station. The Station Manger even printed up an official signed certificate which I now have framed. Maybe I should have contacted Guinness ;-)

I heard a rumor that the following year, a fellow runner attempted to run the "2nd annual South Pole Ultra", but I don't know if he was actually successful in his attempt.

At any rate, here are a few final pics and the videos of my entire experience. 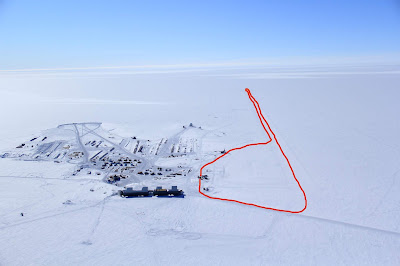 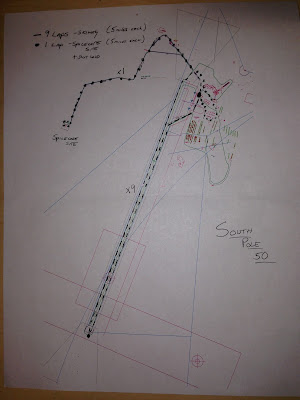 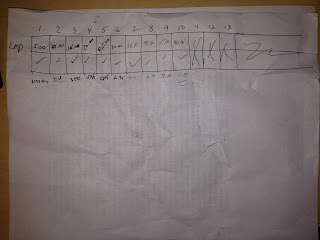 Log sheet showing my times, and that I stopped after 10 loops. 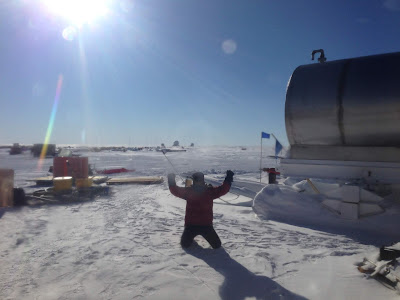 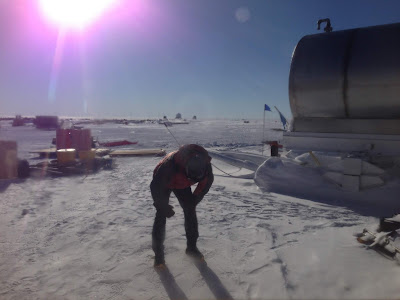 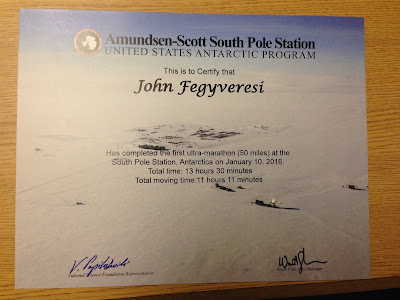