(My life for almost 30 hrs....planes and airports) 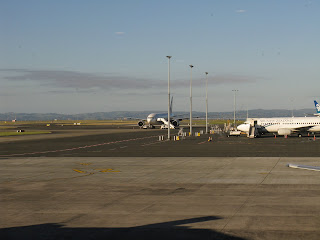 "Well...I went for a nice 5 mile run today around the park, in sunny 75 degree weather."

-The problem with that sentence is that the run was in a park in Christchurch New Zealand, where it is 75 degrees and humid out on November 29th. It's not ~45 degrees north latitude like PA...but 45 degrees south :-)

So far things have gone pretty smoothly. For those of you wondering, I now know the future, but can't tell you or it will open some paradox vortex or something. That's right, it's already Saturday here. Do you want to know the lottery numbers for Saturday? :-)

This is pretty much the first time zone in the world. I am the first to welcome each new hour as it comes. (except for maybe some small island in the pacific just to the east of NZ.)

Started Thanksgiving day by heading to the airport at 10:00 am. Checked in and waited over 2 hrs to leave. The flight to Chicago went smoothly and quickly. Took about 2 hours, but we passed one time zone, so if we are keeping a tally:

Got to chicago at about 1 local time and waited 2 hours to head out on my LA flight that left about 3. This flight was just under 4 hours long. I had empty seats next to me which was nice, however I had to endure 2 hours of torture as they played the film "Mama Mia". For those of you that don't know....it is a basically ABBA music turned into a film/musical....yeah it's that bad.

I got into LA at 5 pm local pacific time and had to wait another 3 hours for my Qantas flight to leave. This wait was tough. The flight finally left at 8 pm and I was in the air for the next 12 hours. This was a great flight believe it or not. I got two full meals, several snacks, 3 great movies, friendly crew members, 4 seats to myself to stretch out and sleep on, and met some great people. by the time I arrived in Auckland, I had entirely skipped Friday by flying over the International Dateline.

It took about 2 more hours in Auckland to pass through all the bio and security checkpoints (as well as customs), and board my last flight to Christchurch. This last flight was amazing. It was only an hour and a half and I flew from the tip of the northern island (Auckland) to the middle of the southern island (Christchuch). The whole time, I could see the awesome mountain ranges popping up. I was literally flying over the set of Middle Earth. I could see Mt. Cook (home to Franz Joseph Glacier) in the distance as well as the Fiordland area. I can't wait to see those places on my way back.


I did manage to get a few pics though: 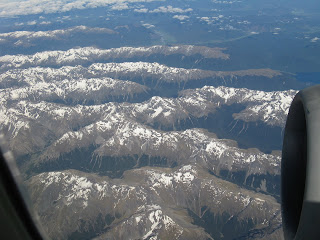 Here's a shot of the snow covered mountains in New Zealand as seen from my plane window. You can almost imagine Frodo and Sam running along the ridgeline. 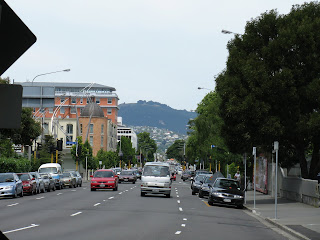 Quick pic of main street in Christchurch. It is a pretty cool little town from what little I've seen of it so far. I can't wait to check out the Antarctica Museum. I was told by some locals that if you are a first timer to the ice, you are supposed to rub the nose of the Amundsen Statue at the museum for good luck. 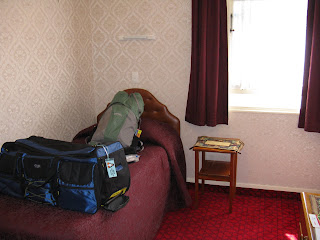 This is just a quick shot of my hostel room. Raytheon and the USAP put a bunch of us up at the Windsor B & B. It reminds me a lot of a hostel on the Colorado Trail. I probalby won't be able to upload pics once I leave here, so I'm doing the best I can with what I have now. I am only supposed to use this computer for 10 minutes though, and I've already been on it for 30. so I will check in later everyone!