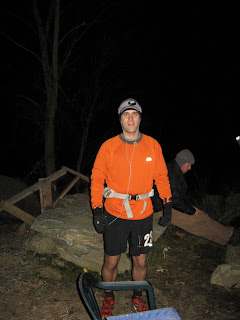 ....I did it again.  I ran another 50 miler this past weekend.   And man am I paying for it.
Last month I ran the Vermont 50 and was very pleased with the course and my results.  I was hoping to get in one last Ultra run before I head off to the frozen tundra this Thanksgiving.  After looking over my options for a late October race, I really didn't have that many choices.
I stumbled across the peakraces website and found out about this "tough" endurance run up in Pittsfield, VT appropriately named the "Funeral Run".  It features a 50 miler, 100 miler, and yes...even a 200 miler. (now that is insane).  When I signed up to run it, there were only 8 other people signed up so I wasn't even sure it was still going to happen.
I got an email from the director "Sherpa John" letting me know that indeed the race was on, and to expect cool temps.   So it was official.
On saturday morning, I again headed up to Vermont by way of another 7 hour drive.  I booked a room at the Killington Motel.  Incidentally this was the same motel I stayed in while passing through on my thru-hike.  The folks there gave me a discounted rate, so I was glad they had a room. 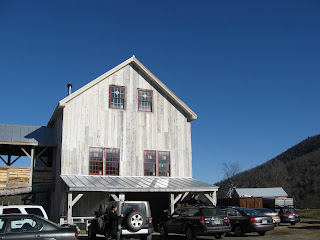 Races started from Amee Farm in Pittsfield VT.  People had a small campsite set up with a roaring bonfire going all weekend long for the ultra-runners.  I stopped in and picked up my packet, and met some of the other runners (including Andy and Sherpa John:  The race directors).  It was at this point that they warned me about the 12 hour cutoff.  They told me that the course had over 16,000 feet of elevation gain.  Let me say that again.....16 THOUSAND FEET of elevation gain......and that the 50 mile split times for the 100 milers was about 16 hours.   Yikes.  This would mean that it would be VERY difficult to finish in the 12 hour time limit.  For those of you wondering just how much elevation gain that is....well it's equivalent to climbing Mt. Katahdin four times in a row.   The course was a 12.5 mile loop (repeated 4 times), with some insane climbs.  They told me that there was an alternative 50 mile route, but that it was mostly road running.  I opted for the trail course, and simply told them that if I only get in three laps...no big deal. 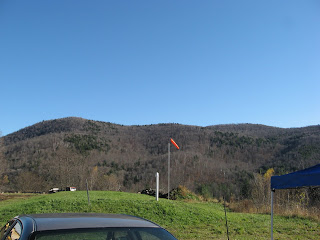 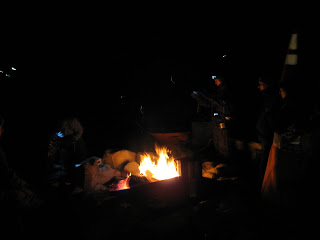 What a great run I thought.  Perfect weather, great aid stations, and good people.  I waited by the bonfire for the last two runners (Jennifer and Austin) to finish up.  I met another couple from Canada who also ran the 50 but who finished up about an hour earlier.  Apparently I passed them after my first lap at the starting aid station when they were finishing lap 2. 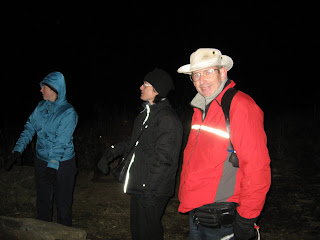 They told me about how they all drove down together and made it into a road trip adventure as well.  I was offered some food and also told where there were heated bathrooms if I wanted to clean up and change....which I did immediately!
Within the next 40 minutes or so, both Jennifer, and Austin finished up to all of us hootin' and hollerin'.  It was a grand finish to a great weekend.  I got in my car with a plan to drive as far as I could until I got tired and ended up driving all the way home.  For finishing the race, instead of an award or belt buckle, they gave us giant hickory hammers with the inscription "Peak Finisher" burned into the side.  I thought it was unique...as well as pretty darn hardcore.  Thanks Sherpa John for a great race, and a great weekend.  I hope to see you at a lot of  Peak Races next year! 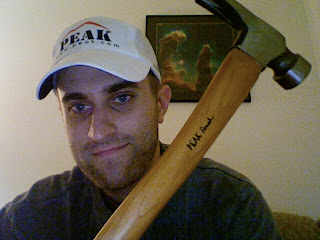 The next day, I took a picture of my Brooks running shoes just to show how destroyed they got from the whole experience. (see below) 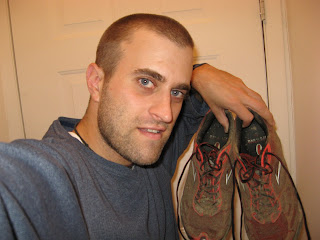 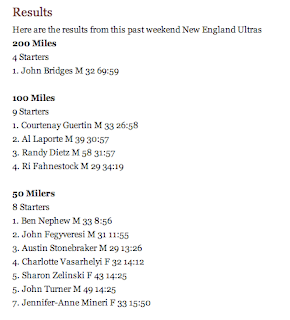