The Seed Is Planted 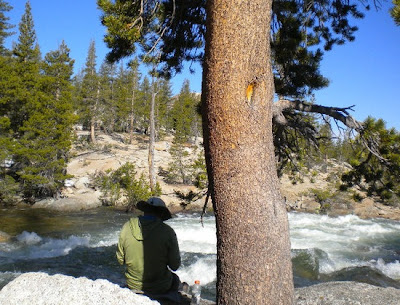 There is a strange phenomenon that exists throughout the long distance hiking community. More specifically, there is a happening that occurs yearly, usually in the early Springtime, to those of us that have spent a fair amount of our time traipsing up and down various wooded trails. In the early Spring of 2008, this phenomenon caught me completely off-guard. Many people had warned me, that following my Appalachian Trail hike, that I would be affected. I didn’t believe them. I was told that once the Winter snow began to melt, and the smell of the fresh soil made it’s way through the air, I would inevitably become afflicted with what is known as “Springer Fever”.

Springer fever can be colloquially defined as an overpowering urge to get outside, find a long trail as quickly as possible, abandon all reason, and get to some walking. Originally this expression was coined by some former Appalachian Trail thru-hikers as they realized that about the same time every year they came down with this urge. Being that Springer Mountain is the Southern Terminus of the A.T., calling this feeling Springer Fever, made for a good play-on-words considering the time of year. In time, Springer Fever became more of an umbrella term that applies to most hikers (and even other adventurers in general) that experience a similar feeling when nearing an anniversary of an epic journey. But what exactly is it?

Each Spring for the past three years I have had this overpowering feeling. It has come in a wave and brought about an almost unnatural longing to be hiking. I have always just assumed these Springer fever waves were brought on by fond memories and feelings from my original A.T. thru-hike. The most surprising aspect of it all though, is how illogical it seems to be. During the last few weeks of my A.T. thru-hike, I was miserable. I was sore, weary of the difficult walking, and ready to go back to a normal way of life. I thought of nothing other than finishing, and getting home as soon as possible. In fact, I thought of nothing more desirable than simply, not-hiking. I even recorded video footage of myself the night after summiting Mt. Katahdin, where I swore to never attempt another hike like that again. Yet exactly 7 months later, I sat in my apartment overcome by an urge to be thru-hiking again. Why? Why would I have an urge to be miserable again?

Part of it is certainly a process of selective filtering. It’s amazing how easily our bodies and minds can bury pain, misery, and negative experiences in favor of the positive ones. This isn’t a new concept though. Time does heal, and filter experiences. Even when we have knowledge and memories of a negative experience, it seems that time has either softened the memory of the pain involved, or help to bury the memory altogether. Obviously, there are some negative memories that stick longer than others, like the loss of loved ones, but in time, even those memories become less painful. When I would think back to my A.T. thru-hike, I found myself thinking things like, “I was pretty miserable at the end, but it wasn’t really THAT bad.” Yet I knew, I had video proof in fact, that it was THAT bad. I swore off ever hiking again. Somehow though, in remembering my hike, my thoughts and memories always seemed to steer in a positive direction. I would be recalling fond images of beautiful landscapes and incredible vistas, rather than just how miserable I was at the end. This is why I think there is something deeper involved with Springer fever and it isn’t just a cabin fever; it stems from something deeper inside us all.

Switching gears for a moment, it seems like a good time to point out my inexplicable and unnatural fixation with geography, maps, and specifically with geographic extremes. For as long as I can remember, I have loved gazing for long hours at various maps. My eyes will wander and I will scope around for strange, exotic, and/or extreme locations on said maps...and declare, "I want to see that place!". It's always a completely ridiculous place too. There's something about random far away locations that draw me in. I want to stand in that place, and see what the world looks like from that point. The "extreme" component always seems to works its way in as well. This is why I've stood on rocks out past Quoddy Head State Park in Maine (furthest point East in the US), and at the Key West monument (furthest point South in the U.S.). In some ways, I think this is connected (at least in part) to why I was drawn to Antarctica as well. One of the most exciting days I had at WAIS Divide, was the day I got to go on a traverse 50km from camp and stand on a remote spot of the ice sheet...a spot no one will probably ever again stand. Of course I recorded the GPS coordinates to that place and can now zoom in on it at any point in google earth. My favourite game growing up was a game called UBI, a board game made by the makers of Trivial Pursuit...but with only geography questions. Yes...I know what you are thinking...it is a bit unnatural.

On my AT hike, one of the places I was most excited about reaching was a small sign in NJ that was at a Car rest-stop. Why? Well...because 1 year earlier I had stopped at that sign and told myself I wanted to be there again some day (see below). 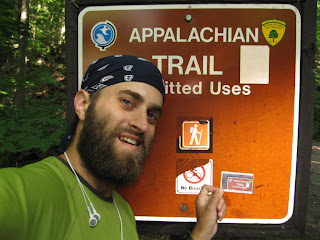 In 2001, I found a random picture on the internet of a sign in remote northern canada and immediately told myself I had to see it in person.:

later that year...I did 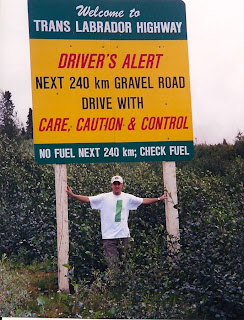 What in the hell is so special about a random sign welcoming me to the trans-labrador highway?  I don't know...but I was drawn to it.  The road trip to see it ending up being an incredible adventure as well.  I saw northern lights, lake Manicougan, amazing remote wilderness, Acadia National Park...etc.  Good stuff!

In early 2003, I saw a picture in a National Geographic magazine.  A picture of a lake in Glacier National Park with a very small island in it called Wild Goose Island.  As I sat there, I said to myself, I don't know how...but some day I will be standing on that small island. 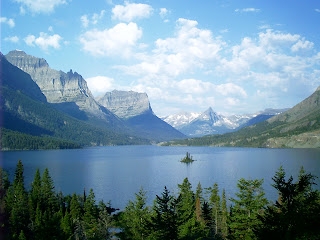 6 months later, on a road trip to Alaska (with kayak on board), I made a detour to Glacier National Park, boated on to the island and stood on it.  It was magical. 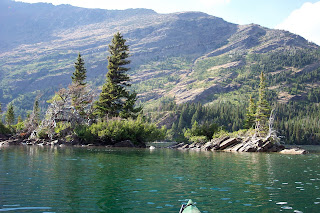 kayaking up to the island

I could go on and on about similar stories like this...stories of where I was drawn to bizarre, unique,  and remote locations.  The point is, once a geographic seed is planted in my head, I know some day, I will make it there.  I don't know why I have this tendency...some may call it weird, I call it a blessing.  It keeps my mind and soul wandering to far away places...and allows me to get out there and see places many never will.

So, coming full circle.  When I was pondering the AT hike years ago, I saw a simple picture.  A picture that changed everything in my mind.  A picture that made me say to myself, "I want to be in that spot".  I ended up printing that picture out and carrying it with me on the entire hike as well.  This was that picture: 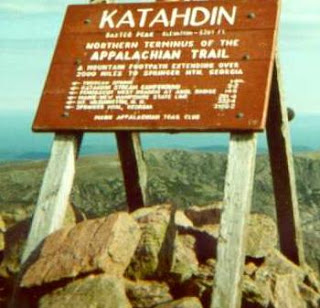 Last year at this time, that springer bug was biting hard.  I had already decided I was going to go hiking for a while and I had considered the PCT.  It just seemed so logistically impossible on such short notice.  But then....then I saw this picture: 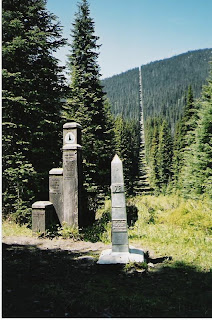 I didn't actually think at that point that I was going to thru-hike, but seeing that picture brought out that feeling of..."I want to see this place".  I want to stand in this spot, and rest my hands upon that wooden post.  It gave me a sense of purpose to at least make my way towards it, even if I didn't think i'd actually make it that far.  In the end, I did make it that far...and it was even better than I imagined it.

And now here I sit, on a random Sunday in March of 2011.  I am very content with my current life.  I am grateful for those around me and feel so blessed for those in my life.   I am in a very good place...happy.  A place though that I am also rather committed to for a while in light of my school PhD obligation.  I have a short list of places yet to see that were sparked in me by some random photo or text that I read years ago.  These places I will make my way to at some point.  Places like Svalbard, Point Barrow, Galapagos Islands, Franz Josef Land, Greenland, Tasmania, Wrangel Island, Angle Inlet, Point Roberts, etc.  Today though...today I made the mistake of playing on google earth.  Something I do way too often.  I came across a photo, a photo that has now started that small seed.  The seed that will some day grow into an adventurous pull.  This won't happen anytime soon, but i suspect it will happen someday down the line.  There is absolutely nothing special about this photo, nothing extraordinary, but nonetheless...it grabbed me.  This was that photo: 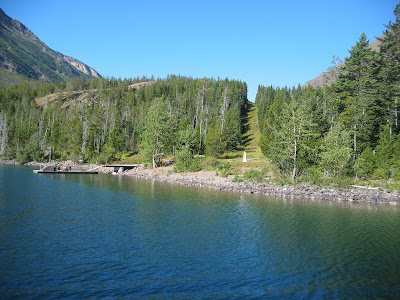 What are you looking at?  Well...this is a photo of the Canadian/US border at the end of the Continental Divide Trail in Glacier National Park.

What a very cool post. Thoroughly enjoyed hearing how you turn the dreams from maps and images into your reality.

great post, i totally get it, i sometimes find myself doing the same thing, my latest excursion was running the Hong Kong marathon after seeing the advertisement for it, next will be glacier national park which has always been on my list.....

Hey Lakewood! So I am one part of that couple last summer up at Sonora when you were hitching into Bridgeport. Never got a chance to say thanks for the beer, for filling up the tank, and I'm glad to see you finished your thru-hike! Jacob and I are hiking this year, so am looking forward to being part of that trail magic from the other end:) We'll be keeping up with stuff at thehungryhoneymoon.wordpress.com.
Anyway, hope all is well with you and life. Cheers,
Kit

Very cool post! I get it ... kinda like (although on a smaller scale) tackling a 100-miler. You're cursing throughout it, but somehow when it's over you sign up for another. I'll stay tuned for the adventure. See you at the Finger Lakes 50s in July!

I love your system, Lakewood. Thanks so much for sharing your inspirations and aspirations with the world. I hope you know that by doing this, you become the inspiration (seed) for others' aspirations. Way to pay it forward...