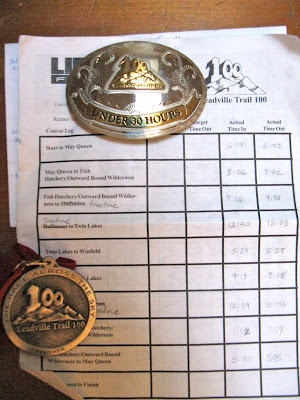 2009 Leadville Memories
With the Vermont 100 already a week behind me, I find that the good-run celebration, the good-day memories, and the post-run relaxation have all been quickly put away into my dusty filing cabinet of life experiences.  It's hard to believe that July is already on the way out and that we are over the mid-way hump of Summer.  The Leadville 100 is now only a mere four weeks away.  Less than a month.  Less than a month to try to squeeze in a proper post-Vermont recovery, a pre-Leadville build-up, and pre-Leadville taper.  The good news is that the foot/toe is nearly back to 100% and I am back to proper running form (whatever that is).  The slightly bad news now, is that I've been dealing with some on-and-off lower back pain recently.  Not sure what that is all about, but it is gone from the annoying stage, through the nagging stage, to the straight-out uncomfortable stage.  I have a followup doc visit Monday to finalize my Antarctica paperwork, so I may run this latest twist by him as well.  I probably just pulled something or pinched something...but it's making my sleeping rather erratic and the Advil isn't cutting it.

Anyway...I know, I probably sound like I'm whining again.  So, on to some details.  I pulled out my time sheets and various memorabilia from 2009.  It was honestly the first time I had looked at my buckle and award since the race.  I had forgotten just how much I put myself through to get that damn buckle, and all at once I was overcome with a sense of accomplishment and flooded with great memories from the '09 race.  My friend, fellow USAP'er, and crew person from '09, Elizabeth, had marked down all of my in/out aid station times from the race.  I also, found a site where split times were recorded according the the race officials here:  SPLIT TIMES.  Not sure who's watch was off, but the times are about 5 minutes different for each split.

I decided the best way to approach the race, was exactly how I approached Vermont.  I created a split-time spreadsheet, and will race against my 2009 self.  The nice thing is that with a finish time of 29hrs 13 mins, I can't really do much worse without dropping.  I'll be much more prepared and in better shape this year, so at least on paper, I should do better.  I put both the "official" times and Elizabeth's times on the sheet.  The nice thing is that Elizabeth recorded times for the Treeline handler area, and the "official" times record a split for Halfmoon.  This gives me some extra data to work with.  The only "gotcha" that I need to look out for is Halfmoon.  In 2009, the course was slightly modified between Treeline and Twin Lakes and the Halfmoon Station was replaced with the Box Canyon Station (due to the helicopter crash).  Not sure if this was an advantage or disadvantage at the time, but it will be different this year regardless.  Because of this, the split time may be much different.  First thing I notice that immediately jumps out at me with the split times is the first 13.5 miles.  I ran these miles a good a clip.  A 10:31 pace is a good clip for a 100 miler and this will be tough to duplicate.  Also, the climb up to Hope Pass absolutely killed me (as did the climb up Sugarloaf on the way back).  My pace going up to Hope Pass was 30 min/miles.  This is slow even for hiking.  The altitude surely played a part in this. dorking out on stats
The plan for this year is mostly similar to '09.  I am flying out early Thursday (18th) and driving to Leadville where I again have a bunk at the Hostel.  I love staying at at the hostel as the owners are fantastic, and the meals are incredible.  Ever since staying there during my Colorado Trail thru-hike in '08, I've had the hostel on my list of favorite places to stay.  Friday morning is the mandatory pep-talk meeting as well as the medical check-in.  The biggest question mark for me is crew and pacing.  I have a few friends who've offered to help, but nothing is set in stone yet, so I simply don't know.  Until I get a solid confirmation, I have to plan for a solo run, just in case.  My hunch though is that I'll have at least a crew, and probably a pacer for a good portion of the 2nd half.   I completed my on-line medical check today on the Leadville Race website.  This check is just the 1st part...with the 2nd part being the in-person check the day before the race.  One sort-of interesting twist and side-note to this year's race is that it is on August 20th....my late father's birthday.  So I will be out there not only running for me, but running for him.  At least I know, he'll be pacing me.
After the race, I am going to spend a few days playing around in Colorado again before heading back to the school, classes, and research.  I'm really looking forward to this part...as it's my sort-of "road-trip" for the year.  Definitely going to visit some places I haven't seen yet.
My recovery week training has gone ok this week.  I eased into my runs slowly and managed a nice and smooth 15 miler yesterday without issue.  My legs were a bit sore/stiff, but that is to be expected.  I hope to ramp up for the next two weeks, peaking two weeks before the race, and then taper for the last two weeks.
That's about it for now.  Hopefully the issues with my back are nothing serious, and in less than a month I'll be standing out on Harrison Ave waiting for that gun to sound again...
A little early motivation for myself... 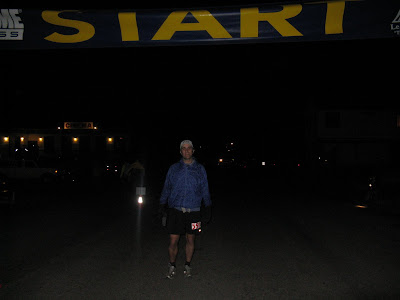 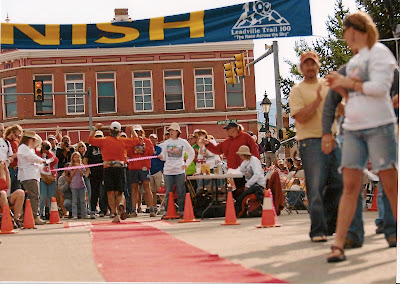 2009 Finish
On a completely random Attention-Deficit-Disorder side note, I finally have been getting some visitors at my bird feeder.  These guys popped in to say hi today, 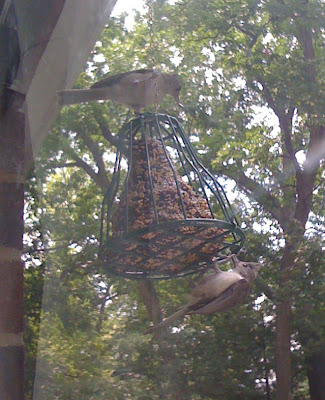 ...and yes, those are in fact tufted titmice.
Seriously, who comes up with these names?
Also, on a school note, my paper (based on my Masters) has finally been published in the Journal of Glaciology:  Late-Holocene climate evolution at the WAIS Divide site, West Antarctica: bubble number-density estimates
Posted by Lakewood at 4:47 PM