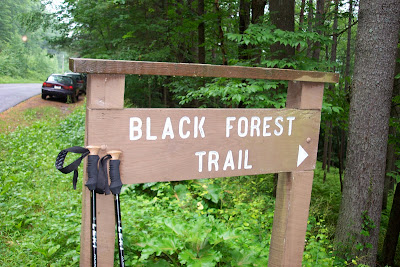 Another big and fun-filled week for me.  Of course when I say fun, I mean punishing hill workouts and very tough long runs.  The big news was of course finding out about my Badwater invitation.  I still cannot believe it, but have started to already work out some logistics.  The Race Director sent me a link for rooms that have been set aside for the race and I was able to book a room for the weekend at the Furnace Creek Inn near the start of the race.  I've booked my rental van as well.  As far as crew, my family is coming through big here, but I've also had some bites on my public invitation.  Both my mom and sister are interested in coming out to help and would fulfill my mandatory 2-person requirement.  I have had three responses on-line from fellow ultrarunners who have also expressed an interest, and I do hope that at least one will be able to come out too.  I would love to have the help of a fellow runner out there and it would be especially nice to have a pacer for some of the race at the end too (assuming I make it that far).  Lastly, I have applied for a Mt. Whitney pass to allow me to climb to the summit after completing the race.

I also found out that the Athletic Building here on campus does have a sauna, and I will be investigating how I can get access to it.  Need to step up my "heat training"

As far as the week of training, I have again hit 90 miles.  It was supposed to be a step-back week, but was far from it.  I had decided sometime earlier in the week on a list of must-dos in the next 4-5 weeks.  That list is as follows:
This past week I decided to knock out number 1 on my list.  Back in 2006 I spent three days hiking the 42-mile long Black Forest Trail in Central Pennsylvania.  I remembered it being a tough trail, but one with a lot of nice vistas.  I decided that this weekend I would drive up to the trailhead before sunrise, and knock out the trail in a single day.  This gave me the opportunity to play around with how much food to carry, how much water to carry, and what sort of supplies I might need.  Sitting here now on Monday I can say that the experience was a success, BUT, I am definitely in need of a rest.  The entire "run" along the course ended up being a lot of hiking.  I was lethargic for much of the day and no matter what I ate, was never really able to kick it in to gear.  It ended up taking me 11 hours to go 43 miles.  Granted there was over 9000' of gain and I stopped for two full lunch breaks...but 11 hours is just too long.  So....why so tired?

Over the past three weeks I've gone non-stop with my training.  Meaning: NO rest days.  Not sure why I was on this self-imposed "streak", but it stops today.  I need rest days.  So after a nearly a month of going non-stop, I am taking at least one day off (and maybe two).  My body needs some recovery.  More power to those out there who go months or even years without taking a day off......but I will not be one of them.

So as far as the list, this knocks out number 1.  I will be attacking numbers 2 and 3 over the next two weeks.  For the 24-36 hour endeavor, I will be do roughly 80+ miles of the Mid-State Trail that I am completely unfamiliar with... and through the night, carrying all my own supplies.  I am actually quite excited about this one.  The other numbers are pretty self-explanatory.

At any rate, here are some stats for the week.: 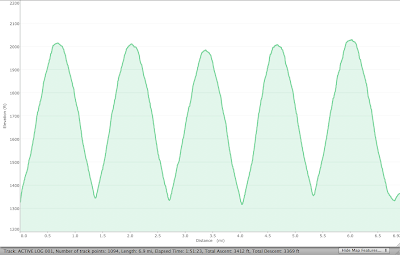 Wednesday
Miles: 12
Ascent: 1700'
Notes: Headlamp
Door to summit run to Mt. Nittany and back.  Same as last week without extra mile added on.  Came down the summit the same way I went up this time too. 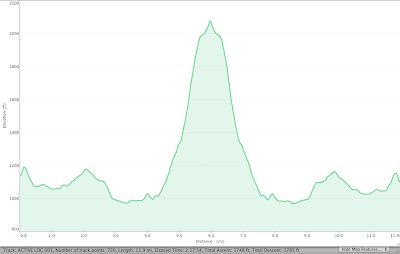 Sunday
Miles: 43
Ascent: ~9000'
Notes: Headlamp for last 2 miles
This was an all out blitz of the Black Forest Trail.  I did finish the entire trail but not until just after dark.  Rivers were swollen and in the first mile I had to ford Slate Run.  Nothing like an entire day of wet feet.  Food/Water worked out ok, but I was sluggish ALL day.  A bit sore too.  Gonna rest a bit this week.  The trail is actually 42 miles, but a couple of wrong turns and having to wander up and down some creeks to find good crossings, added about another mile. 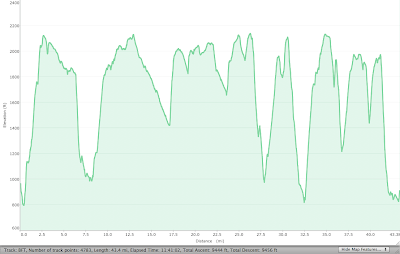 Profile from the BFT.  The total gain registered was a bit high..should be about 9000' 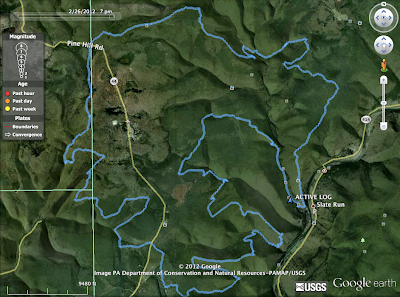 The track from the run 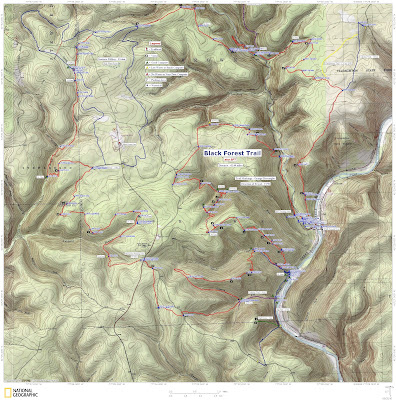 Nat-Geo TOPO map of the BFT