It's official. I went up tonight to the departure building and did what they call the "Bag Drag". They weighed all my baggage and tent/sleep kit for a flight scheduled to depart for WAIS tomorrow at 5:30 PM. I will be flying on an LC-130 Hercules plane and the flight is about 4-5 hours long. In other good news, I found out that my science gear is flying out tonight ahead of me and will be waiting for me when I get there tomorrow.

So far I would say that I've had a pretty good time here in McMurdo. The first few days were a bit hectic, but these past few have been great. I've done almost all of the trails offered here, and have met a lot of great people.

This afternoon I went for another hike around the Hut Point Loop trail with fellow Penn State Goesciencer, Marco. In the sun it was easily 40 degrees. It was warmer than PA by a lot. Took some photos of some seals...but still no penguin sightings (although Marco did see one a few days ago and does have a picture of it).

The though of having no internet access for 1 and half months kind of sucks, but I will send out a few email updates when I can. Have a great Christmas and New Years everyone and I update once I'm back in McMurdo.

A lot of scientists use Antarctica as an analogue for Mars.
You can see why from this picture. 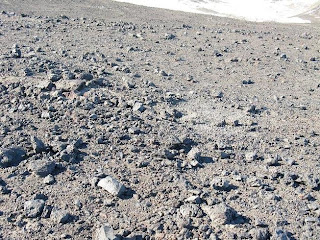 Standing near Hut Point with Mt. Discovery in the distance 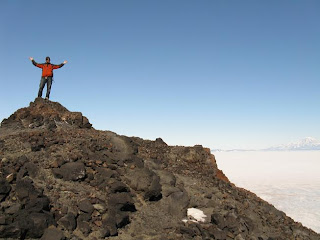