We Have Ice Core!

Standing a few miles from WAIS Divide in the middle of nowhere.... 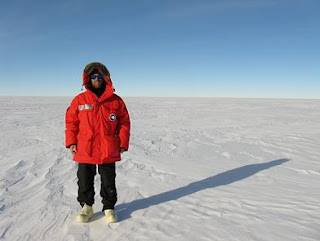 Standing at Hut Point in McMurdo photographing the sea ice 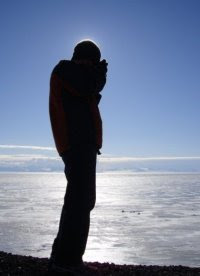 Coming up on the end of week 2 here and we have our first few meters of ice core. Earlier this week the drilling team successfully pulled up a few meters, picking up where we left off last year at 581 meter depth. The core handling team has been training all week on the processes for properly cataloguing and storing the cores. This year is a bit different than last because no cores are being shipped back to the National Ice Core Lab in Denver. The ice we are drilling this year is considered brittle ice and would most likely cause the cores to break up if the were transported. Because of this, we have to leave them here for an entire year for them to "relax". The reason it's so brittle, is related to how much pressure the ice has been under at such extreme depths. The tiny air bubbles that were trapped in the ice have a tendency to explode after we pull the cores up and that pressure is released. Even putting a warm hand over the ice core can cause it to shatter. Of course this also means that I probably won't get any new samples to work with for my thesis...but I'm not too worried about it.
Anyhoo...
I am going out with a geophysicist today to help him install a seismic station a few miles from camp. Should be fun! Also, It's my turn to update the official blog tonight at waisdivideoutreach.blogspot.com so check it out tomorrow.
I'll write again sunday
-john

I'm so impressed! I can't believe that just a couple years ago you were sitting in a cube at the Cleveland Clinic and now you are traipsing around Antarctica. I know this will sound nerdy but I can't help but think of Stargate haha. :) Time is just flying by, I graduate in June and I've already applied to 4 PhD programs for next fall. I'm really glad to see that you're doing well and seeing so many awesome things.