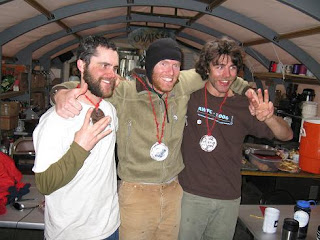 Well it's 2009 and that means it's time for Penn State to put USC in their place. New Years was quite an experience here at WAIS. We had an incredible New Years Eve dinner, replete with crab legs and tenderloins. Our chef is outstanding here (and like I said earlier...runs a top notch restaurant in Bar Harbor, Maine when not down here). Some of the camp staff decided to improvise and make their own fireworks...which unfortunately led to someone getting injured and two people getting sent home from camp for breaking some serious rules here. It was kind of a crappy atmosphere here around camp because of this. Fortunately, we held the annual New Years Day official olympic games yesterday and most people were quickly cheered up. We had four major events: Snow Tower building, Sled pulling, Sumo Wrestling, and Miniature golf. There was also an unofficial Longest Drive competition and a WAIS Divide 4 mile run---of which I was the only one crazy enough to participate :-)

We've now got 10 straight days of work, so it will a while till I get a day off. I'm starting to put a pretty good plan together for NZ now too, with quite a few tramps/hikes picked out.

We have another flight coming in today, and quite a few people leaving....so camp will be smaller yet again tonight. 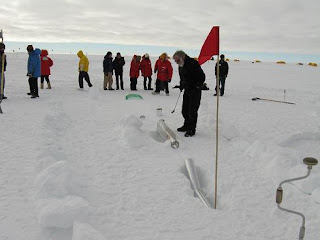 Me and the winning snow tower. Our team got gold with this 8ft 11 incher. 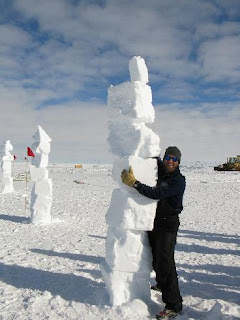 After the sled pull race... 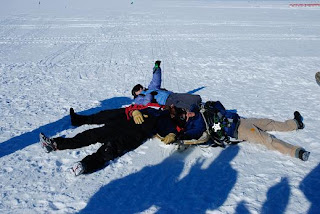 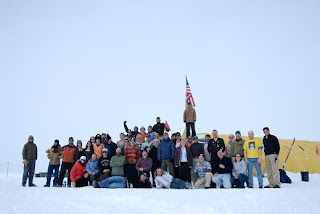