As I sit here writing this, the first major storm of 2009 is starting to come through. We are already up to 30 knot winds with very limited visibility and blowing snow. It is supposed to get worse as the day progresses too. I'm actually a little excited about it. I have been here almost 4 weeks now, and have not experienced a true Antarctic storm yet.

In other news: We have a new tradition here at camp. For part of the gift exchange, one of our carpenters (Todd) made one of the electricians (Zack) a shirt with his picture on it (along with some random Arabic text). Everyone thought it was a funny shirt so we started a "Zack Shirt Time Share". Every day, a different camp member wears the shirt, and then after dinner, passes it on to another person. Yesterday was my lucky day...and I posed proudly for my photo. 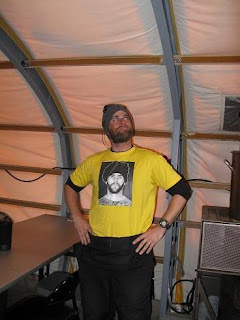 In other big news, we did hit 1000 meters and everyone made sure to get videos and photos of it. It's pretty hard to believe that for an entire kilometer down, there is a giant borehole in the ice. Of course the depth to bedrock is 3500 meters...so we still have quite a ways to go. 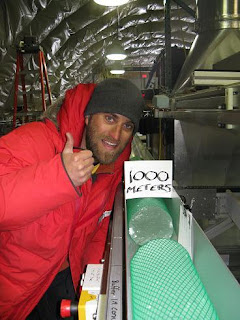 Another tradition that I'm trying to keep up here at WAIS is a friendly one of "Roaming Gnome". I told Christine (A friend of mine back at PSU), that I would take pictures at camp featuring cowboy spongebob. It's been a rather interesting experience finding new and exciting places to photo Mr. Squarepants.
Spongebob posing over an ice core. 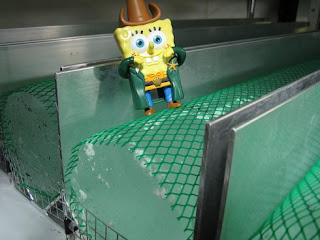 I will make sure to get some good photos and videos of the storm's "before and after" and post them as soon as I can.

Hey JF! Wow, dude, yer way far away from Lakewood OH - heh. Very cool. In fact, cold I suppose. Well, don't get cabin fever, I have heard it can be really bad. Do you get to do yer laundry ever?

Steve...how's the new job? I actually considered at one point a job that would allow me to "drive the country" so to speak.

It's not too bad down here during the summer months with 24 hours of daylight. It's the winter months that can really lead to psychological problems. I am definitely starting to think about how in two weeks I'll be hiking in warm weather through southern New Zealand.

As far as laundry...there are showers and a single washer/dryer set up here. The catch is...for every shower you take, you have to shovel 1 barrel of snow into the snow melter. For every laundry load...it's 3 barrels of snow.

You still open-mic'ing at all? I try to keep playing in state college, but haven't really written any new songs in a while.