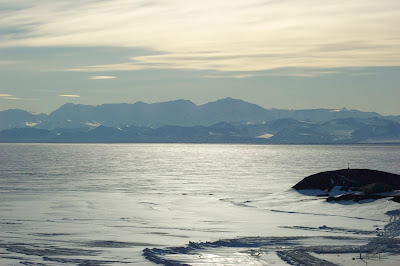 The view of the Royal Society Range across from McMurdo Sound
Again I find myself sitting in the lovely confines of McMurdo Station, eager to set out to a new and exciting field camp.  We were originally scheduled to fly to the beautiful and awe inspiring "Union Glacier" site tomorrow...but the flight was canceled due to weather.  The forecast has the system hovering for a couple of days, which means I get to patiently sit here and wait for my chance to go where very few do.
The Union Glacier camp is actually a privately owned Antarctic Camp that very few who are associated with NSF projects, get to go to.  Normally, the people that come through Union Glacier are the very rich folks that are wanting (and paying heavily) to summit Vinson Massif in a quest to do the seven summits.  It is a beautiful camp, with the best food/chef in Antarctica.  I've seen pictures from previous deployments there, and the landscape is indescribable.  To give you an example, a photo that a fellow Penn Stater took last year at the Union camp won the Wired.com photo contest Union Glacier Wind Scoop (Where I'll be)
http://www.wired.com/wiredscience/2011/04/geology-photo-contest/?pid=1175
I've been out running a lot in town.  Believe it or not, there are actually some good trails here, despite them all being very rocky (all volcanic).    All of our prep work for the deployment is already done, so we are just in standby mode.  Hopefully, we get out soon.  I am anxious to see some of the sights, get my hands dirty, and install some polenet stations.  I plan on taking hundreds of pics, and marking lots of GPS waypoints to track where I go.

In the mean time, here are some pics from the trip so far: 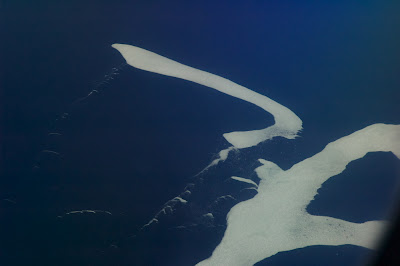 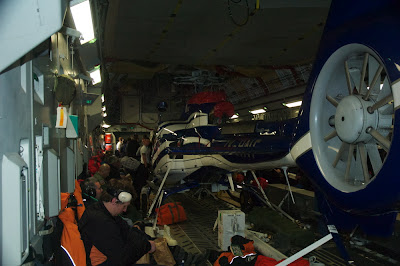 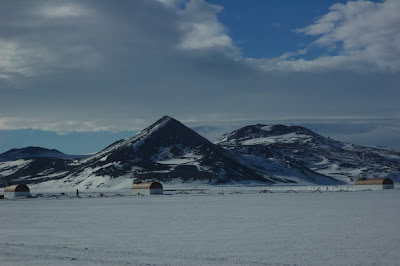 Observation Hill...seen from the ice runway. 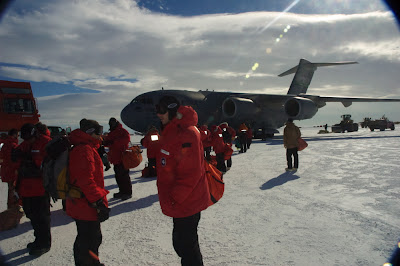 Getting loaded into Ivan the Terra-Bus 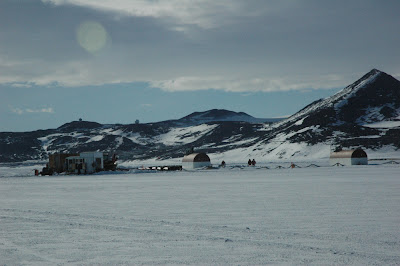 Coming in to town 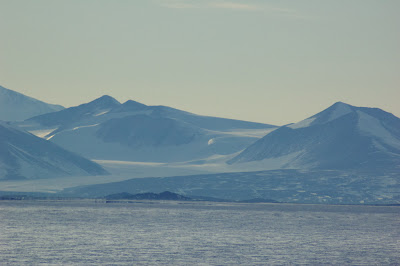 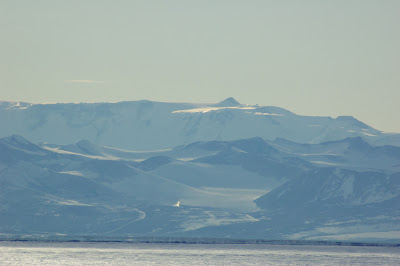 The "Pimple" across McMurdo Sound 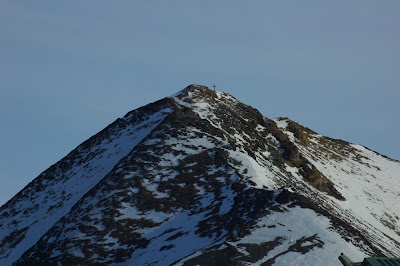 The view just before running up Observation Hill 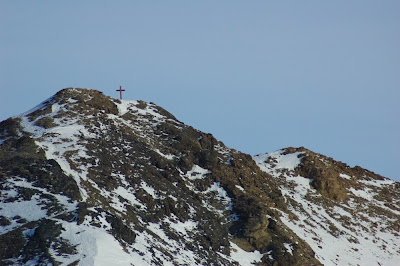 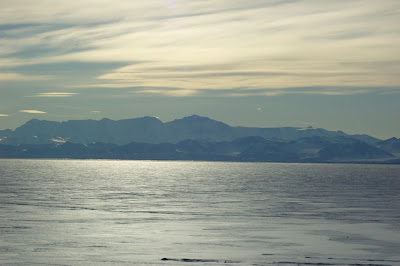 Another wide-angle of the Royal Society Range 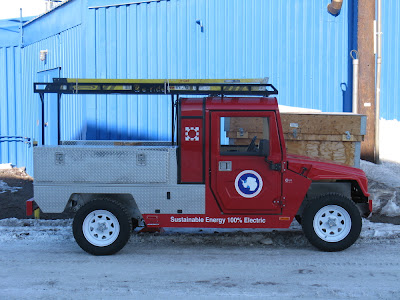 Even in Antarctica, we drive electric cars.  If only we could get people
to drive these back home instead of their 12 mpg Dodge Durangos.
Posted by Lakewood at 11:22 PM 2 comments:

C'MON WESTERN STATES!  Again this month, I will put my name in the hat to participate in the Western States 100 Race for the following year.  I tried in late 2009 (for the 2010 race) but didn't get selected.  Unfortunately, I could not enter the lottery last year as I ran no qualifying races in 2010 due to my PCT thru-hike.  This means, I lose my continuous "lottery loser" status and go back to square one.  *Sigh*.  So, in short, my odds of getting selected this year are about 10% or so (not good).  I'm hoping with enough good mojo however, I can swing that proverbial karma my way and get a lucky draw.  C'mon everyone...let's send some collective karma my way!
Why is Western States so important you ask?  One could argue that it's not worth it.  It is expensive, travel is a pain, and it is certainly very commercialized.  For me, it's all about one single thing.  That one single thing can be summed up in one word:
Grandslam
That's right.  I am ready to give the grandslam a go.  I have now successfully completed both the Vermont 100 and Leadville 100 in the same year....TWICE.  (2009, 2011).  This year, I finished Leadville (what many grandslammers say is the hardest to finish due to tight time limit) in 25 hours 35 minutes.  In addition, this year I also ran both the Vermont 50 and Oil Creek 100 in the month and a half following Leadville.  I think....I am ready.  I really want to run Wasatch as well, but don't want to enter unless I know I'm going for the slam (At least not yet - this might change as the years go on).
For those of you that don't know, the Grandslam of Ultrarunning consists of doing four distinct 100-mile races in the same calendar year:  Western States 100, Vermont 100, Leadville 100, and Wasatch 100.   These four races are never farther than 5 weeks apart and in the case of Wasatch, it's less than three weeks after Leadville.  Each year, several dozen runners start at Western States with the hopes of being named a "Grandslammer", but in the end, usually only about a dozen actually finish all four races.
For me, all of this is a moot point however if I do not get into Western States.  As of today. I am already registered for the Vermont 100 and the Leadville 100.  Both races I had planned on signing up for again anyway.  Next week, the lottery opens for Western States and I will again put my name in.  So....wish me luck that I get a lucky lottery draw!  As far as Wasatch, they offer provisional acceptance to all runners that are attempting the Grand Slam.  So, if I get into Western States, I can register for Wasatch provisionally and can bypass their lottery.
If karma doesn't go my way, and I don't get the WS nod, I also have my name in the Hardrock Lottery (for the 3rd time) and have a few other little interesting bits up my sleeve.......*grin*
Anyhoo...on to some other news.
The past few days have been crazy regarding my upcoming Antarctic deployment.  I am scheduled to leave Thursday, but all Hell broke loose when Qantas Airlines went on strike this past weekend (thereby grounding all flights).  The US Antarctic Program uses Qantas Airlines to get all participants down to New Zealand.  My flight was essentially set as TBD.  Thankfully, an Australian Judge ordered an end to the strike which means pending a huge backlog of flyers, my flight will be on schedule Thursday.  Craziness.  Can't believe I'm ice-bound in 2 days!
On a personal running note, several members of the Nittany Valley Running Club went out for a group run on Sunday afternoon to honor the late Ed Thompson.  For those of you that don't know, Ed suffered a fatal heart attack during the Tussey mOUnTaiNBACK last Sunday.  What would have normally been an exciting and celebrated race-day last week, was sadly marred by Ed's passing.  The group run in his honor was a nice jog along leg 8 of the Tussey course.  The group (about two dozen of us) stopped on the road at the place where Ed fell, held a moment of silence, placed flowers and running shirts by a small erected wooden cross, and then traded some good stories.  It went really well and I was glad to be a part of it. 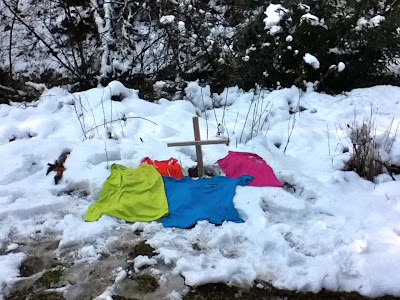 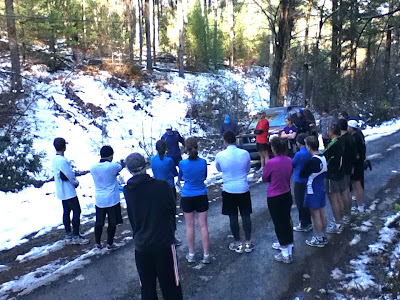 Trading some Ed stories
Posted by Lakewood at 1:59 PM No comments: