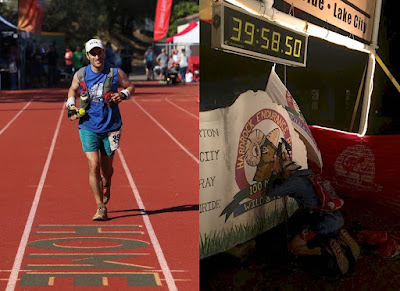 It has been a rather interesting past few days.....

Allow me to take you back briefly for some context. If you've read any of my posts here, you'll know I have a rather long, complicated, and storied history with two of the crown jewel races of ultrarunning: the Western States 100, and the Hardrock 100. Back in Fall of 2016 I wrote a long past about my experience (and horrible luck) with each of these races' lotteries.

The short of it is this: I started entering the lotteries for both of these races since my very first year of running ultras back in 2008. Year after year I would re-qualify and re-enter both lotteries, and then ultimately not get selected. It got to the point where it was almost comical.

I had actually convinced myself at one point that some supernatural forces were conspiring to simply not allow me to run either race.  After eight years of zero luck in both lotteries, I become quite despondent about it and had mentally given up. I decided that I simply wasn't going to try any longer. That particular year my overall odds of getting selected for at least one race were over 70% and I still didn't get selected. You can read about some of this on my lotteries post here:

The one thing that gave me a glimmer of hope, was that I was selected 39th on the Western States wait list that year. I had assumed though that it was unlikely the list would go that deep. Well...it did. But ONLY JUST BARELY. I quite literally found out I got into Western States about 12 hours before the start of the race when Gordy Ansleigh gave me his Bib Number. You can read about that experience here:

I ended up running Western States that year (2017) and loved it, despite having some heat-related issues. Later that summer, I went back to Hardrock to captain an aid station for the race and cheer on finishers. You see I had convinced myself that I needed to earn some karma with the race to appease the lottery Gods.

Well that fall, I put my name into Hardrock once again, with 128 tickets (more than anyone else in the entire lottery). During lottery day, I went for a local 50k run to keep my mind off of things. I got home, and found out that I was selected and after 10 years...I learned I'd finally be going to Hardrock. You can read about my lottery day here:

The next summer, I stood at the start line for Hardrock, and 40 hours later, kissed the rock. It was magical. You can read about my experience here:

The very next December I re-entered both lotteries again, not expecting anything. I was thrilled to learn that somehow, despite only 4% odds, that I was selected again for Hardrock! I'd be going back to run in the opposite direction! You can read about that here:

But the lottery gods had other plans for me. As race day approached in 2019, the run was ultimately canceled due to high-snow pack in the San Juans. Thankfully, the race committee decided to roll everyone over to the summer of 2020, so I'd still get to run again.

But then....well, Covid happened and the race was canceled for a 2nd year in a row. Not only was it canceled, but they decided to re-do the lottery and I was not re-selected. Just like that, after 2 years of waiting, my entry was revoked. Damn. I talked a little about the reality of the "New Normal" here:

...and things moved on. The world continued to rotate...and revolve...and life progressed. I continued to re-enter both lotteries, and slowly accrue more tickets, and never got re-selected for either run. I went back to Hardrock two more times to captain the finish line aid station, and loved every second of it, despite a small part of me being envious of the other runners. Volunteering actually gave me an excuse to turn my trips to Silverton in to Moto-Camping adventures on my new motorcycle....as well as hike a few more 14ers.

Which brings us up to this past week.

As usual, I entered both lotteries again. Given my number of years of entering since my last runs, my odds have slowly climbed. I was somewhat hopeful for my Hardrock odds as I was at about 38.5% for that lottery. But for Western, my odds were something like 14.9%. What this means is that my odds of getting into at least one event were (1 - (.851)(.615)), or about 47.7%.  But...my odds of getting selected for both was only 5.7%.

I've always wanted to run Hardock once in each direction, and this can hopefully be my chance. As far as Western States, well I'm excited to see the course again, and share it with some great friends who also got in this year.

I'm going to sincerely miss captaining the HR finish line aid station this year. It is truly a great joy of mine to see all the finishers come in and serve them up some hot food. I will definitely try to come back to that role in 2024 if the slot is still open!

This is going to be one of the most difficult challenges I've faced yet with regards to ultrarunning, and I'm definitely not getting any younger. It'll be really hard....but I'm cautiously excited.