The Success of WAIS Divide, Antarctica 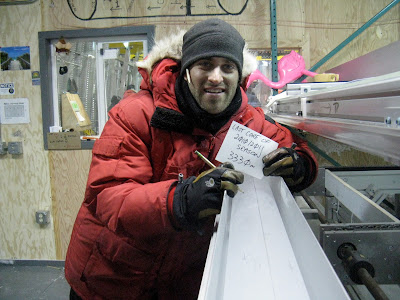 Well...I made it back to McMurdo safe and sound.  It was an incredibly long and trying season this year. The drillers faced multiple issues and it seemed we were doomed from the beginning.  But...as usual, they had a few tricks up their collective sleeves.  Just when it looked like the season might end early, they pulled out some magic and we were drilling again.  After over two weeks of straight drilling with no off-days, and a 5 day season extension, we pulled up a core from a depth of 3330 meters.  This marked the longest US core ever drilled, the 2nd longest ice core ever drilled (2nd only to Vostok), and the completion of the goal we all had set at the beginning of the season.  This ice contains information from over 100,000 years ago that is very valuable to many scientists.  We had amazing ash layers this season, bizarre folding in the cores, and increasingly warmer temps in the ice.
There's really not much more to say right now.  I'm tired.  I am looking very forward to getting home this year.  I will be in NZ for only a short time as I have more important obligations back home.  I will try to put together a better synopsis in a few days, but I am really just glad everything was a success.
Here are a couple of plots the Drillers put together for this season and for the entire project.  I was a part of every drilling season except the very first - 07/08 (although my Masters thesis was based on data from the first). 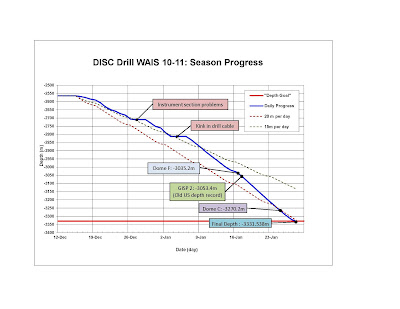 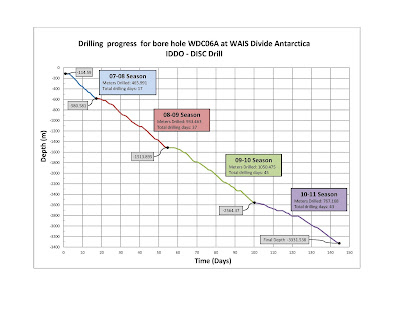 3000m and Deepest US Ice Core!
Originally uploaded by John 'Lakewood' Fegyveresi
Despite a rather rough start to our drilling season here at WAIS Divide, we are steamrolling now and passing all sorts of milestones. Late last week we finally hit 3000 meters. Then only a few days later we passed Dome Fuji (Antarctica) in total depth. Just yesterday we finally passed GISP 2 (Greenland) in total depth making the WAIS Divide Ice Core the DEEPEST American Ice Core EVER drilled (We are currently at just under 3100 m). Our season has been extended by 5 days thereby putting our original goal of 3330 meters possible. Hitting this depth would make the WAIS Divide core the 2nd deepest core every drilled by anyone (2nd only to the Russian Drilled Vostok core which is closer to about 4000 m). Crazy!

Anyhoo. I'm really looking forward to the season wrapping up and to getting home. 10 days of drilling left!

Snowpitting at WAIS Divide
Originally uploaded by John 'Lakewood' Fegyveresi
For the past couple of days here at WAIS Divide, a small number of us have been working on a new back-lit snowpit. We have some media folks here filming clips for a WAIS Divide documentary and part of the footage they requested was inside a backlit pit. We took great care to shave the wall nice and clean. Of all of the pits I've worked on over the past three years, this one certainly came out the nicest. Great annual stratigraphy, spectacular preservation of surface features, and several noteworthy wind crusts. Cool stuff! In this pic, I'm pointing to the largest crust seen in the 2-meter wall. These large crusts could be related to the interesting surface glazes I've also been documenting.

Ice core drilling is starting to wrap up. We only have about two weeks left. This Saturday we will hit 3000 meters and so everyone is getting excited.

That's it for now. Looking forward to get back home.

WAIS Divide Recreation (& Update)
Originally uploaded by John 'Lakewood' Fegyveresi
Things are rolling along at WAIS Divide. The ice coring is progressing and we are nearing a depth of 3000 meters. The drillers have had to deal with several difficult issues this year with their equipment, but have always been able to get us up and running very quickly. The engineers in their group are absolutely amazing. No drilling issue is too difficult for them to solve.

On the science side of things, we are logging away. There are about 2 and half weeks of drilling left with our goal still sitting around 3300 meters. It's hard to say if we are going to make this goal or fall a little short...but I'm sure it is going to be close. It still boggles my mind to think of how successful this ice-coring project has been. In 3 and a half drilling seasons, we've been able to drill nearly 3 kilometers of ice and we've still got 2.5 weeks to go.

This week, the science techs (the group i'm a part of) finally went to 8 hour shifts. One member of our team was delayed in getting here and finally arrived. This gave us enough people to make 8 hour shifts a reality. Up until now we were doing two 12 hour shifts. It didn't leave much time for any kind of exercise or basic personal time. But now...with 8 hour days I have plenty of time to finally catch up on some science papers and even have a little fun outside. This afternoon a group of us went out and decided to hit some red golf balls around. It was really nice to have a little time to unwind.

As of right now I'm scheduled to leave WAIS around Jan 31st. While I love my great-flat-white 2nd home here in Antarctica....I'm looking forward to getting back home in PA.
Posted by Lakewood at 10:04 AM 1 comment:

Happy New Year!
Originally uploaded by John 'Lakewood' Fegyveresi
Well here it is. 2011. I already posted my 2010 year in review last month, but I just wanted to welcome in the new year from WAIS Divide. 2010 was a wonderful year and I can only hope that 2011 brings me just as many wonderful memories. The above pic is from the PCT kick off last April. If time permits, and money allows, I may try to attend the kickoff again next year just to reconnect with people that I met this past summer.

I am excited about another year that I can fill up with fun and exciting new experiences!

now get out there and get to some living people...
Posted by Lakewood at 11:15 AM 2 comments: