Off on Another Antarctic Adventure 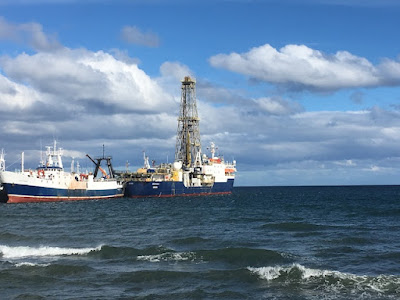 This will be a short post as my internet connectivity is intermittent and only allows text and low-res pics at the moment. The short story is that I am off on another Antarctic expedition....my 8th now.

This trip is significantly different than previous trips however. In all previous 7 deployments, I have traveled to the Continent of Antarctica itself. Most of that time was spent up on the West Antarctic Ice Sheet as part of the WAIS Divide ice core project (5 seasons). I also spent one season at South Pole for an ice coring project there as well. Lastly, I spent one season just around McMurdo station as part of a short deployment to run ground penetrating radar near the station.

One of my primary research interests while in graduate school and now beyond, has been to learn as much as I can about the West Antarctic Ice Sheet, particularly with regards to its historical behavior and its potential instability.  There is a lot of evidence that this particular part of Antartica has collapsed rather dramatically in the past. With current trends today, and introduction of more circumpolar deep water under the ice sheet, it is very possible a new collapse could start to initiate. West Antarctica holds over 4 meters of sea level equivalent water, trapped in the ice. You can imagine just how a 4-meter rise in sea level might affect the world considering how many people live in low lying areas.

Late in 2017, I saw a posting for an upcoming research expedition aboard the US ocean drilling vessel: The JOIDES Resolution (Part of the IODP program). This particular vessel is outfitted to be able to drill sediment cores deep into the sea floor. While my background is in ice coring and glaciology, I was intrigued by this expedition posting as the primary science objectives all related to the past behavior and potential instability of the West Antarctic Ice Sheet.  The basic idea being that as the Ice Sheet advanced and retreated it, it altered the concentration, makeup, and properties of the seafloor sediments (depending on if they were overridden or newly deposited). So.....I applied to be an on board scientist and wrote a proposal to investigate samples in our micro-CT at my lab (CRREL).  To my surprise I was invited to participate! 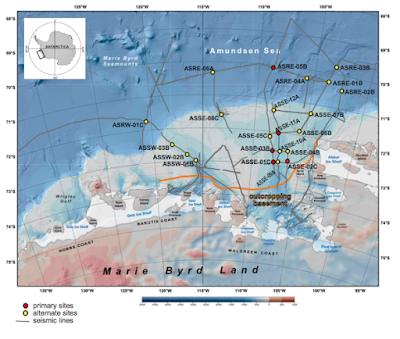 I bring a unique background to this project and a long history working in this region. I have also primarily worked on studying "physical properties" of ice cores, and on this expedition I will be on the sediment coring "physical properties" team. My ship-board responsibilities will be to run the recovered cores through various instruments to measure things like density, porosity, strength, etc.  After the cruise, I will obtain my own personal samples and continue the research back home.

One week ago, I flew down from Boston to the very tip of South America...Punta Arenas, Chile.  We've been docked here for several days and going through a series of safety and training courses. We've also broken up into our respective teams and started learning our lab equipment and practicing with core processing. This morning, we finally pushed off of the pier and are currently anchored a few miles offshore making final adjustments.  Sometime later tonight or early tomorrow, we set sail for the Amundsen Sea (A 6.5 day transit). Once in the area, we are hoping to drill 5 different sites in the Amundsen Sea just off the coast of the West Antarctic Ice Sheet. A lot will depend on the intensity and distribution of the sea ice however, so we're going into this trip very flexible and with a lot of backup/alternate drilling sites.

We also recently found out that our internet will likely not work once south of 65 degrees. So....I will be completely out of contact. So...with this all said...I'm incredibly excited and honored to be on the expedition. I hope that I can contribute significantly and that my post-cruise science is also successful. If for some reason we do get some internet connectivity, I'll be sure to update as I can.

We also have two outreach scientists on board that are using #Exp379 twitter hashtag while they can.

I brought my Spot Tracker with me as well, an may try to have it ping my location from time to time.
If I remember, it should update and you might be able to see where I am by going to my shared site:

Wish me luck...and yes....there are three treadmills on board that I've already made use of. I look forward to many miles on those wonderful little machines. I've heard the captain does let folks run loops out on the heli-deck as well, so I'll certainly take advantage of that provided the wind and waves aren't too rough. Which also reminds me, I have plenty of sea-sickness meds if I need them. So far, the rocking has been very mild.

Lastly, I am still working on my 2018 year-in-review post, but probably won't be able to post it until I return in March.

Take care everyone, and see you all in the Spring. 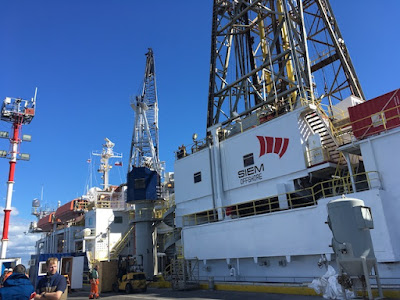 The JR up close 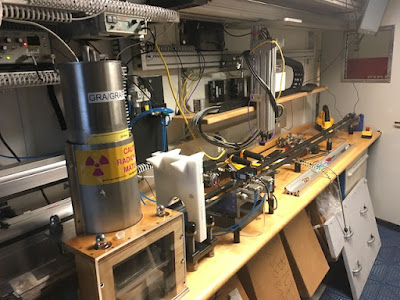 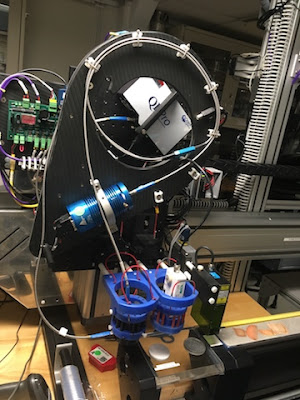 Part of the SHMSL (Section Half Multi-Sensor Logger) 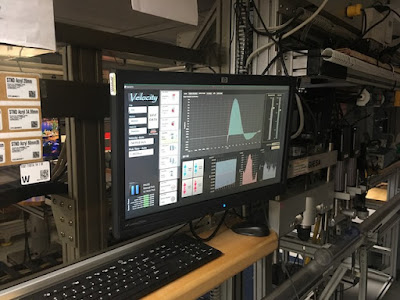 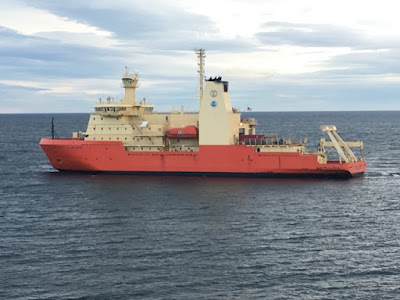 The US (NSF) Nathaniel Palmer Vessel also coming into port 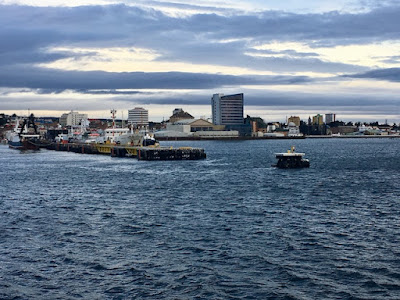 My view this morning moments after leaving port.
I won't set foot on dry land again until March 20th.