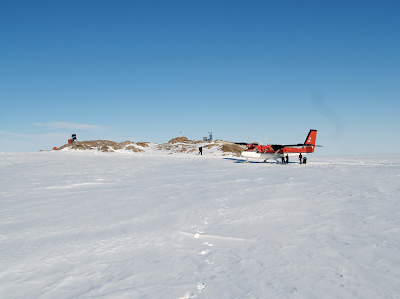 Polenet Station deployment (via Twin Otter) on a remote nunatak in West Antarctica
For the past three years, I've had the incredible opportunity to live and work at a remote field camp in West Antarctica.  This field camp, WAIS Divide, is the site of an exciting ice-core drilling project.  Each year that I've deployed, has been somewhat different, but all very memorable.  During one season I had the unique experience of driving out on a short traverse about 50 miles from camp.  I felt like a true Antarctic explorer when I stood on the ice sheet miles from any human being with the thought that no other human had ever stood on that spot.  In 2009, I also had the unique experience of tagging along with the Penn State seismic team on a short traverse out of McMurdo up to Cape Royds.  We passed by Scott's hut at Discovery Point, the calving front of Barne Glacier, and the penguin rookery near Cape Royds on our way to Shackleton's historic hut.  This year, it looks like again, I have been presented with a very fortunate and exciting opportunity. 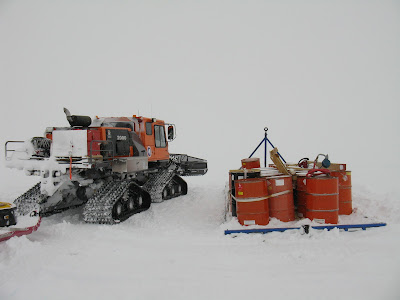 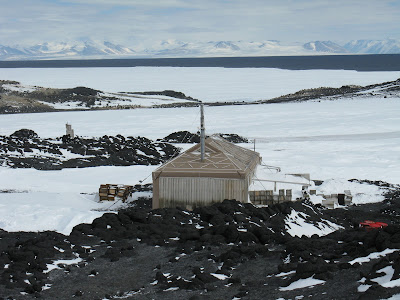 Shackleton's Hut at Cape Royds (with hundreds of penguins in the background)
The POLENET project in Antarctica (Polar Earth Observating Network) is an ongoing endeavor to install and maintain an entire network of seismic and GPS stations around Antarctica.  There are several Universities, PIs (Principal Investigators), companies, and groups involved.  Historically, Penn State has been heavily involved as we have several PI and Co-PIs with the project here.  In order to install and service these remote stations, various teams of scientists deploy out of McMurdo to "Base Camps", like WAIS Divide, and then fly out to the stations via small Twin Otter flights.  The incredible part of these smaller flights, is that it means flying over remote nunataks, going to beautiful places like Patriot Hills, and hopping all around West Antarctica by way of a tiny twin-engine Otter (not much larger than the Cessna 172's that I am licensed to fly).  This is all great John, but what does it have to do with you....
For a fourth year, I will again be deploying to WAIS Divide to work a short 5 week season.  There will only be 3 science techs this year, as we are only expected to drill about 100-150 more meters of ice.  I was very grateful and fortunate to be asked down for another season.  I will be able to again work on my surface studies and deploy some solar sensors for my own PhD research, so I am very excited.  The WAIS Divide camp is a great place to work and live out of in Antarctica.  The camp is always run very smoothly, and the people are incredible.  Every year I come home with great stories and wonderful memories.  Because of the short season, I was not scheduled to deploy this season until mid December....and so was recently approached by one of the Polenet PIs, and asked if I'd like to participate in the Polenet project before my WAIS Deployment.
I said, so let me get this straight..."I go down before WAIS Divide for a few weeks, I fly all around remote parts of West Antarctica in a Twin Otter deploying and servicing GPS and seismic stations, I will work out of Patriot Hills (a private camp that very few people ever get to go to), I get to see and work in the Ellsworth Mountains (home to Antarctica's highest peak: Vinson Massif) and at Union Glacier, I get to possibly put some of my old computer engineering skills to work, I get to work along side UNAVCO folks (a company/organization I have a lot of interest in), I get to dig snow-pits and study the surface all over West Antarctica, AND I still get to go to WAIS Divide after?"
"Yes"
"uhhhhh...you're kidding right?"
"No"
"DOH!  I really,really want to..... BUT.... I don't want to be away for 3 months straight again, it's just too long to be away from home, and I have some commitments back home that I can't miss before I go to WAIS Divide.  If only there was a way to split it up........*sigh*"
"You can come back home in-between deployments"
"uhhhhh...you're kidding right?"
"No"
"woohoo!....sign me up please!"
So long story short....and if all my paperwork goes through (which some of it is still pending), this will be the plan.  I have already passed my physicals for WAIS anyway, so I don't have to do any of that, AND I've got all of my other paperwork submitted.  Just waiting on the final "ok".
If this does go as planned, I will certainly take LOTS of pictures and it will undoubtedly be another Antarctic season to remember! 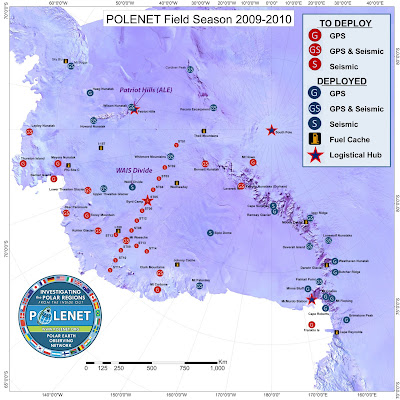 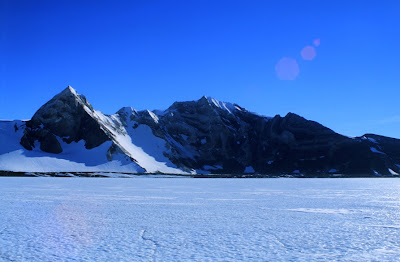 One view from Patriot Hills 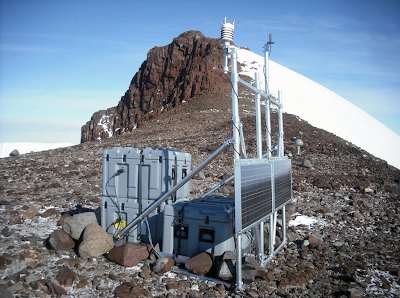 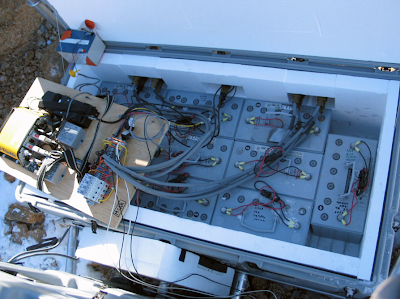 Some of the guts and inner-workings of a polenet station
Posted by Lakewood at 2:34 PM 1 comment: 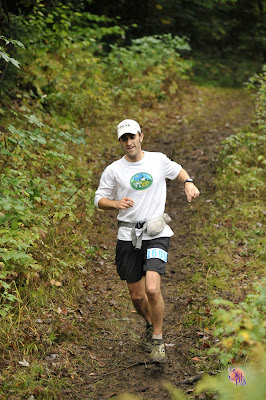 If I were asked what I thought my best race ever was, I would probably say this year's Leadville.  I worked harder than I ever had during a race, and it paid off.  I improved almost 4 hours on my 2009 time.  So in this sense, my "best" race would be somewhat of a measure of how much grit, determination, and effort I put into it.  If however, I were asked simply, which race went the most perfectly or which race did I achieve my best peak performance....I would say this year's Vermont 50.

I went into this race very well prepared and trained, but also with no real set goal.  I just wanted to have fun.  I sit here on Monday, not even 24 hours after running, and have absolutely no pain.  I simply cannot believe how well yesterday's race went.  Here's what I can tell you: 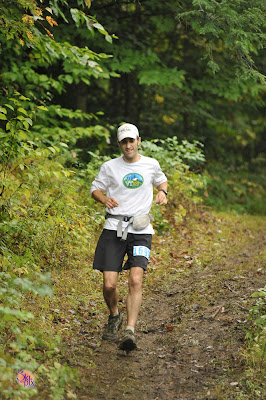 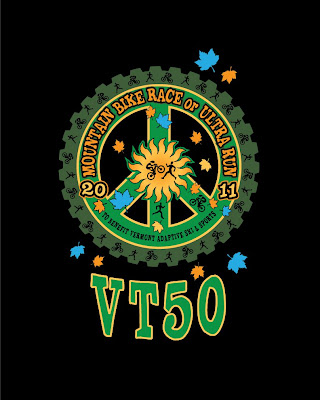 Will all the hustle and bustle as of late with school and various other commitments, it's hard to believe that another ultrarun is yet upon me.  This Sunday I will participate in my 3rd Vermont 50 race.  While I am super excited to be running what has been, and still is, my favorite ultra...I am also having some mixed feelings.  First off, I have an important school conference in San Diego next week that I'm frantically trying to prepare data and a poster for.  This has put running as rather low on my list of priorities.  Also, knowing that Vermont was devastated by Hurricane Irene, and that the course had to be modified because of it, makes it feel a bit off.  I feel terrible for the people and communities that were most affected, and will be bringing some food donations up with me (every little bit helps), but it's almost made me feel like I should stay away, so that the communities can rebuild in peace without be swarmed by crazy runners and bikers.  Although, having so many supportive people come up can and should bring the spirits of the locals up a bit I would think.  Like I said, it's just a weird year for the race.
Also, for the first time this year, I don't really have a set goal for a race.  I suppose if I had to set a time one, I would strive to beat my previous VT50 time of 10:37 and perhaps shoot to break 10 hours even.  I know I can do it, as I broke 10 at Finger Lakes this year.  Honestly though, I love this race so much, I really just want to go, and enjoy the beautiful colors, and wonderful people.  So...my goal for this year's VT 50, my REAL goal, is simply to have a smile on for all 50 miles.  This was my very first 50-miler back in '08, and I want to have as much fun as I did back then.
I'm sure it will be a wonderful muddy fiasco...but that's usually when I'm smiling the most!
So...wish me luck and here we go!
...on a side note, I finally put a short video together of my Leadville pics from this year:
Posted by Lakewood at 9:22 PM 2 comments: 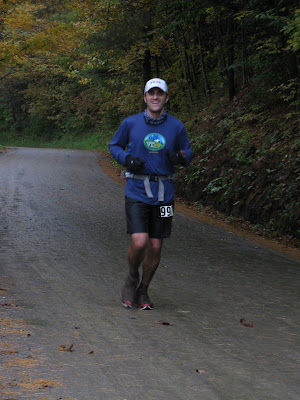 Vermont 50, 2009
In light of the recent devastation brought on by Tropical Storm Irene, the event organizers for the Vermont 50 were still unsure about the feasibility of holding the annual VT 50 race.  I just received word this morning that the race is in fact still on, and the hearty people of VT are working hard to clean up and make the course usable.  In an email statement, they have said there will likely be a few reroutes and some additional jeep road sections in lieu of damaged single-track, however.  This doesn't bother me one bit though.   The VT50 is the race that started it all for me.  It was my first, and still one of my favourite ultras.  I will always have the softest of spots for it.  I was genuinely sad last year when I wasn't able to run it (due to my PhD Candidacy exam).  This year, I eagerly signed up in June, and have been anxiously waiting ever since.  With the big summer of ultras over for me, and number 10 now in the bag, I'm looking forward to a fun, slower-paced, fall season of running.  Nothing like running in the beautiful woods while the leaves are changing.  How could you not want to run through this? 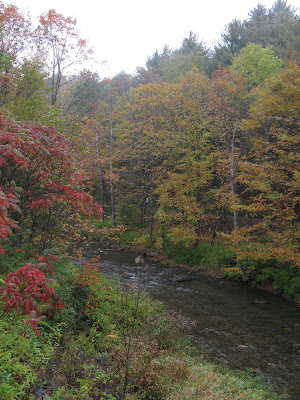 So in just under three short weeks, I will again be trotting down the roads and trails near Brownsville VT, undoubtedly getting incredibly muddy, and giggling and smiling the entire time.  Can't wait....
Posted by Lakewood at 12:28 PM 1 comment: