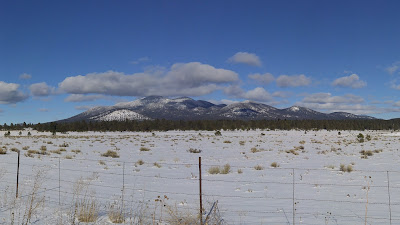 Sitgreaves Mountain
I've lived in Flagstaff now for just over 3 years. In all my time here, I've become quite familiar with all of the various topographical features in the area. I've hiked to the summit of just about every major peak, I've explored lava tube caves, and I've ventured out on some of the most remote and inaccessible roads and trails. In short...I've explored.
In all of my various local adventures, and across my myriad journeys, I have however, discovered one particularly oddity. There is one specific feature that seemingly goes unnoticed. There is a prominent mountain peak, just to the west of town, that despite being quite visible from the major interstate (I-40), no one seems to know what it is. What's more, is that no one ever talks about it, mentions it, or really even recognizes its existence at all. I like to call it, "The Invisible Peak".
Well, this peak has a name. It's called Sitgreaves Mountain. 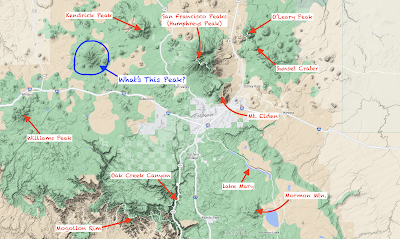 Some of the well-known and prominent features around Flagstaff.
Well...except one "Invisible Mountain"
Even over on SummitPost, their entry for Sitgreaves literally says, "This mountain stands alone along I-40, very visible, but very few bother to ask, 'What is that mountain?'. It's just passed by. Very vew people actually take the time to figure out what the name of it is, or figure out a route to the summit"

Well...given my fascination with geographical oddities, I think you can see where this short post is going. This past weekend, I took a trip out to Sitgreaves Mtn. with the sole purpose of finding my way to the summit. It's important to note here, that there are no established trails up the mountain. Any trekking one does on or around the peak is entirely off-trail. It took a fair amount of planning, route finding, and research, but I was able to come away from the adventure with a successful summit (despite getting hailed on and nearly struck by lightning!)
I used various websites like Summitpost and Hikearizona to determine the best routes not just to the summit, but to the mountain itself. Given that there are no established trails on the peak, even staging a vehicle for the hike can be tricky. Lucky for me, I recently picked up a very-capable new toy, that makes these types of excursions a bit more accessible. A couple of months ago I decided to sell my trusty 125cc scooter, and upgrade to something a little more robust. I opted for a new Honda Trail 125. Needless to say, this has become my go-to method of transport around town whether it is to the coffee shop, my office, or the trails. This little machine is small enough that I can explore just about anywhere on it (including single track trails), without fear of dropping it like with my much larger (and way heavier) Himalayan. In addition, it gets over 125 miles per gallon, which is definitely a plus right now in this very inflated economy. The only downside is that it means I've been using my bicycles less for my daily commutes. 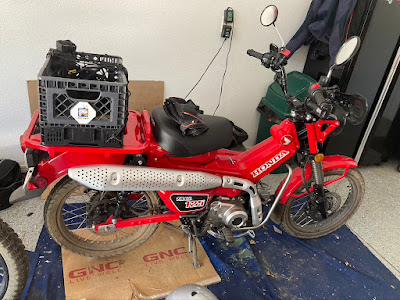 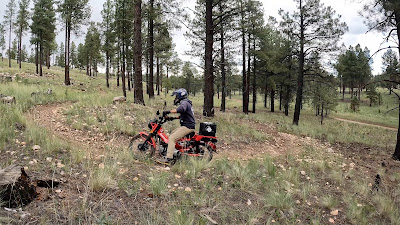 Ripping up some single-track trails on the Honda
I spent an afternoon last week recording some fun video clips of me playing around behind my house on the new Honda. As you can see, I really enjoy playing on this new bike...
So...back to Sitgreaves Mountain. I sorted out a way to get to the base of the mountain almost entirely on backroads and forest roads. On the Honda, I knew I'd have no trouble with this route. The questions started to pop up once closer to the peak. Many of the roads around the base of the mountain are not viewable on satellite imagery, and are not well-documented. I simply didn't know the condition of some of my planned roads. My hope, was to be able to take the little Honda all the way up to a high saddle just East of one of Sitgreaves sub-peaks, known simply as "Peak 9004". Then I could simply hike my way over to the primary peak of Stigreaves passing up and down several false summits and sub-peaks along the way. I would essentially be doing a ridge-line traverse from Peak 9004 over to Sitgreaves proper. 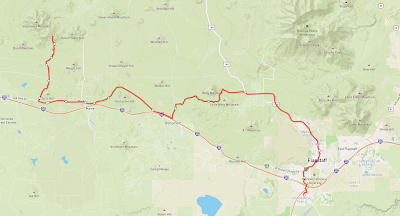 Planned route once at Sitgreaves Mtn.
Well, this was the plan anyway. As usual, it didn't quite work out that way. As I made my way up the roads towards my intended parking area on the saddle, the roads became increasingly technical and degraded. It was getting harder and harder to make progress, even on the small and nimble Honda Trail 125. Eventually, I split off from my intended route on a slightly better side road, and ultimately parked just a few hundred meters further down when the road simply petered out in the woods. 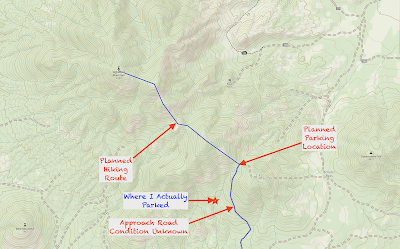 Where I actually parked for the hike...
The hike proved to be much more difficult than I had anticipated. The gradients were true Barkley-level, and I found myself moving quite slowly up the steep inclines. I did eventually make it up to Peak 9004, the first of many summits that day. After a quick celebration, I began the rollercoaster hike over to Sitgreaves Mtn, going up and down several summits and sub-peaks along the way. The entire route was free hiking through the woods and while easy to navigate, was surprisingly difficult terrain. It was littered with rocks, fallen trees, and steep cambers. By the time I did finally make it to the Sitgreaves Summit, I was presented with another rather unfortunate problem. It had taken me longer than I had anticipated to make the hike, and so I was now right in the middle of peak monsoon weather. 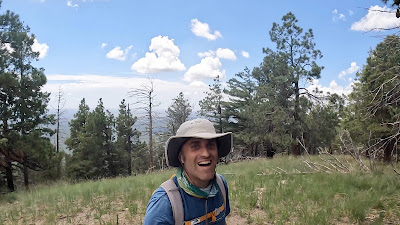 Snapshot from the summit of Peak 9004 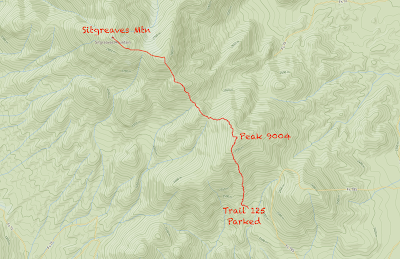 My entire route over to Sitgreaves Mtn (GPS Track)
I didn't waste anytime on the Sitgreaves summit, and immediately started my descent. Rather than do the rollercoaster again, I opted for the slightly longer but ostensibly quicker route back that would follow a relatively stable contour around the ridges. This would also keep me off the exposed summits, which were now being threatened with lightning.
As I descended, the hail, rain, and lightning soon followed. I was down far enough to be in the protection of some trees, but I was getting absolutely soaked. In addition, the lightning was frighteningly close with many strikes occurring effectively right on top of me. In addition, all the rain was making an already unstable and highly-angled contour around the mountain, incredible loose. Every other step I took, the ground would give way and I'd slide a few feet down the debris-covered hill side. It was arduous hiking, and incredibly slow going. After what seemed like an hour in the pouring rain to go less than 2 miles, I finally made it around in view of the Honda. The rain let up by this point, but of course the primitive forest road that I had ridden up earlier in the day, was now a flowing torrent of water and mud. 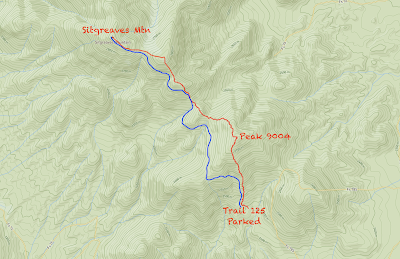 My approximate return route (blue). My watch wasn't recording anymore.
When I got back to the Honda, it was of course soaking wet. I got it fired up quickly and it was another 40 minutes of very-slow and tedious navigation down an incredibly loose and water-logged road. There was even snow in a few places! When I finally did make it back to the paved roads, I was happy to have survived without any major incidents, lightning strikes, or bike drops, but still had to ride about 25 miles back in the rain, while soaking wet. Well...I shivered a lot, but did finally make it back home about an hour later...where I promptly jumped in a hot shower to warm up. The Honda got incredibly caked in mud, and I got another experience like no other. Truly, it was a ridiculous day. Just how I like it ;-)
I captured a lot of footage of the day and am including a very-low-resolution video below for more of an intimate and in-depth picture of just what I experienced that day. Enjoy!
Posted by Lakewood at 6:55 PM No comments: