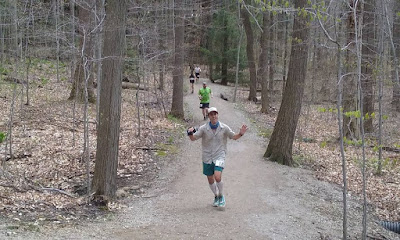 Having way too much fun at the O24

Well, I've certainly had some fun these past few weeks.  Late last year at the finish line of the Mountain Masochist 50, I met a fellow runner named Jim. Turns out that Jim is a professor in the Geosciences department at my old undergraduate university (Case Western Reserve University).  We chatted about it and he casually extended an invite for me to come some time in the Spring to give a seminar talk in the department.  I tentatively agreed, but with my South Pole deployment looming, I honestly wasn't sure I'd really be able to commit seriously.  I just wasn't sure what sort of commitments I'd have in the spring after South Pole...and I was already planning to go to the IPICS conference in Tasmania.  So while the thought of revisiting my old University and giving a talk was thrilling (..although technically I went to undergrad at CWRU for Engineering), I wasn't getting too excited just yet.

But somehow, things found a way to line up.  Jim contacted me about a month ago and told me that they could squeeze me in late in April right at the end of the Semester.  As extra motivation to get me to come, he told me about a 24 hour event that many in the department would be running called the O24. I knew I had 3 Days at the Fair scheduled for 2 weeks later, but I thought what better way to get in one last really long run before race day than a 24hr!

So...very long story short, is that everything fell into place and it all turned into a really fun weekend.  I drove down to Cleveland from Vermont (stopping in Rochester along the way), and made it plenty early on Thursday to get settled in and practice my talk.  Cleveland was just as I always remembered it....grey and rainy.  It was a bit weird that as I looked out my hotel window, I could literally see one of the buildings I used to work in before I quit my job back in 2007 to hike the Appalachian Trail.  I spent a few hours wandering around campus and visiting my favorite old coffee house.  It's amazing how I haven't been back to campus in over 15 years, yet it was like I never left. Even the menu at the coffee house hasn't changed. 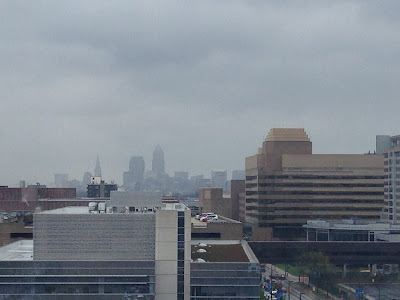 View from my hotel in Cleveland

On Friday, I gave my talk to a room full of students, faculty, and various researchers from multiple departments, and it was the first time that I truly felt a talk went just as I had hoped.  I was well-prepared, I had some fun ice-breaker slides, and I was successfully able to merge detailed science, with more general overarching concepts. I normally am very critical of my own talks...but for once I came away confident and pleased. After the talk, I was told people genuinely enjoyed it and that they were excited to have me back on campus.

Jim took me around campus and I was able to meet with every faculty member to hear what is that they research.  I was pleasantly surprised at the diversity of projects going on in such a relatively small department...and the lab facilities they had on site.  It also brought a smile to my face to chat with Ralph Harvey on campus.  The last time I spoke with Ralph on the CWRU campus, was in in 1996 right after he made his first meteorite discoveries in Antarctica.  Now, 20 years later, we were right back to talking Antarctica again, but this time including all of the fun projects I've been able to work on.  It's crazy how some thing really do come "full circle" 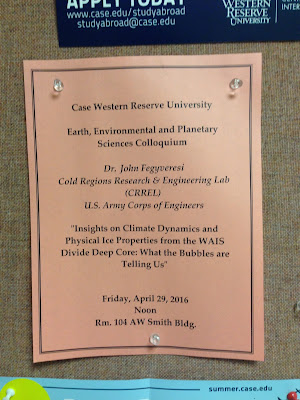 My talk announcement at CWRU 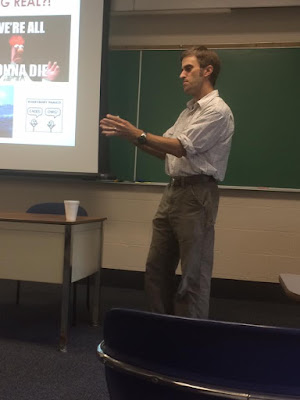 Telling the audience how as scientists, we all need
to work on being better communicators 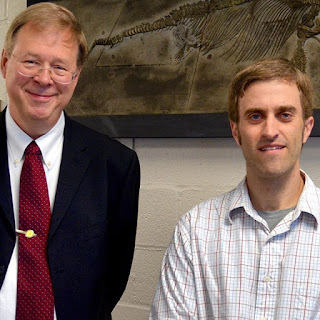 Picture with the Dean of the College, who was at my talk
and who also ran the O24!

The next day, I drove down early to the East side of Cleveland near the small town of Kirtland.  There, I set up a small station and got ready for 24 hours of fun running.  I knew the weather was calling for a lot of rain, and that 3 Days was on my schedule, so my plan was to just have fun and never push hard.  I just wanted to take it easy and aim for maybe 70-80 or so miles.

The day started well and I never felt rushed.  I jogged along at a nice 9:30 pace and rather casually ticked off the first 20-30 miles in a couple hours.  I never really paid attention to my mileage or place during the event....for me it was all about the company and the scenery.  The course was a one mile loop, but on a very lovely crushed gravel, wooded path.  It was a superb little loop and even had a nice little climb of about 60 feet in the middle.

There really isn't too much to say about the race other than it went just as I'd hoped.  I took a lot of breaks, and even sat in my car for about 30 minutes for a "nap" at one point during the wee hours.  The rains went for over 12 hours so it was getting a bit tiresome.  I called home a few times, chatted as much as possible with other runners, and just smiled at the thought of running an event near my old college town. 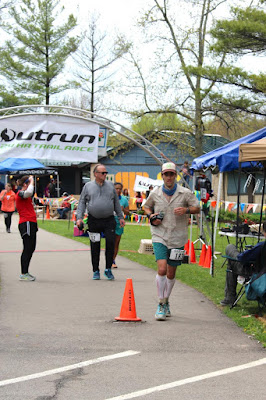 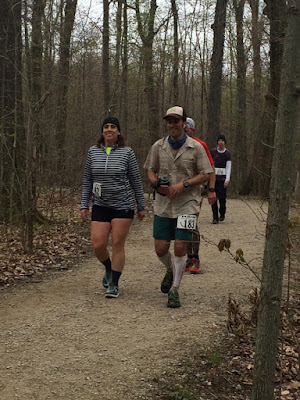 Chatting with one of the
other CWRU professors (Beverly) 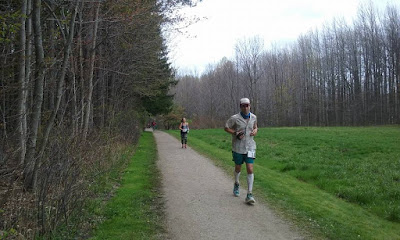 Enjoying the course before the rains came 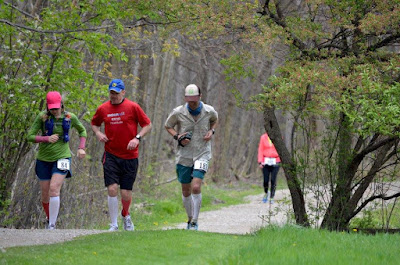 Running with Steven and Rhonda-Marie from Canada.
Rhonda-Marie was also at Barkley this year.

Despite my easy pace, and my many breaks, somehow I still managed to break 100 miles and crossed the final timing mat with 105 total.  This netted me a really nice buckle to add to my collection.  One side story to the O24 event was that there was a 15 year old girl running this year (Angela) who managed 66 total miles...which totally blew my mind. When I was running cross country in junior high school, I remember thinking the 5 mile turkey trot was a long run.  The best part was, I don't think Angela ever stopped smiling.  Great stuff for sure. 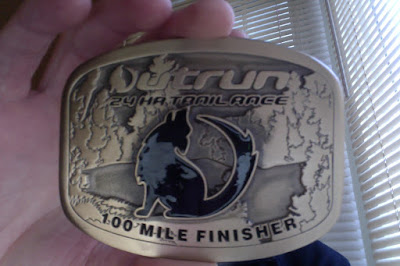 Really nice buckles at this event!

After the run, I napped for several hours in my car, and then drove back into Cleveland to meet up with an old friend that I haven't seen since 2008. In some sense, I thought it would be a little weird meeting with him honestly, but it was as if we had just hung out yesterday.  It was fantastic catching up with him and I have already invited him to come and stay with us up in New England if he ever gets up this way.

On to a more silly/fun story...

I have once again dusted off my motorcycle endorsement! For years I rode a motorcycle and after many close calls with cars, I decided to "hang up my helmet" as it were.  But a few weeks ago I stumbled across a craigslist ad up here for a small scooter for sale and I couldn't resist.  My car has over 130,000 miles on it now and I'd love for it to last at least another year.  My daily commute to work though is about 13 miles each way on back roads, and those miles are adding up fast.  I kept telling myself that I wish I had a cheap and efficient way to get to work.  I looked into biking, but that's really far for a daily commute (not to mention very hilly here).  I also looked at the public transit here, but the closest stop is about 5 miles away and it only runs every couple of hours (although it is free).  But when I saw the craigslist ad for a near-mint condition scooter, for a few hundred bucks, I jumped on it.

I went to look at it and having a fair amount of motorcycle "tinkering" knowledge, I could tell that this machine was well taken care of.  It definitely looked as though it had been just sitting in storage for a long time though (which could be bad depending on if he left fuel in the tank).  The owner agreed to put a new battery in it and throw in the helmet if I bought it.....so I couldn't resist!

Since getting it to my place and registered/insured...I've managed to clean it up nicely. I changed out all the engine and gear oils, and changed out the spark plug.  I also did a quick clean of the carb, and took care of a few other minor things (most notably silencing the horrific and obnoxious turn signal beep).  Lastly, I mounted my old milk crate on it, and strapped a bicycle netting over it so that I could use the scooter for small grocery store runs.  I even mounted a small bottle holder just for fun! So far, it's been running swimmingly and I couldn't be happier!  Plus, it gets over 85 miles per gallon, so it's really efficient.  For every day I commute on the scooter, I will save about 0.6 gallons of gas, or about $1.50. More importantly, for every day I commute on the scooter, I will decrease my CO2 emissions by 12 pounds per day! (1 gallon of gas burned makes 20 pounds of CO2!). I do realize that scooters, particularly 2-stroke ones are actually much "dirtier" burning than cars, but in my case thankfully, I'll be riding a much cleaner 4-stroke.

This whole project has made me realize just how much I miss tinkering with a bike.  Even if this is just a silly twist-and-go scooter, it has made me remember just how fun it can be tooling around on two wheels. I don't know how long it will last, as it is a cheaper Taiwan-made scooter...but for now, even if it just gets me through one summer of fun riding, it'll be worth it! And since it's a 125cc, it can handle just fine at 45 mph. 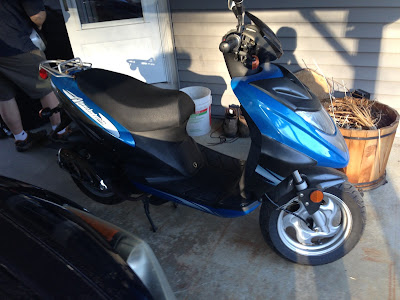 This was the scooter when I went to pick it up. 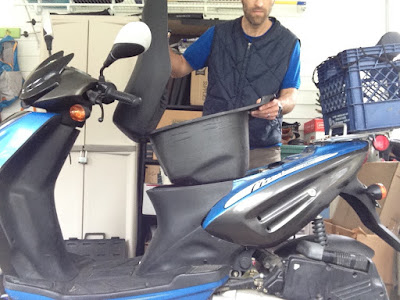 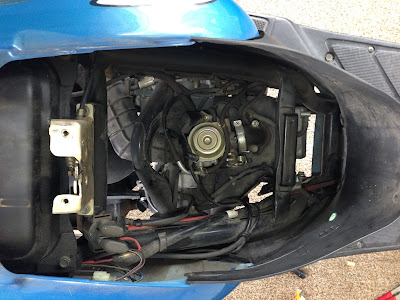 Carburetor was definitely a bit dirty 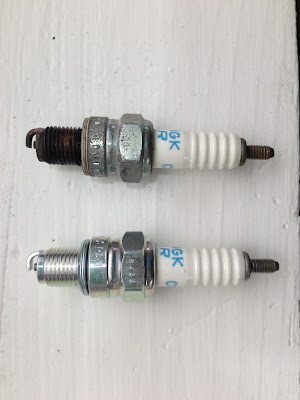 The spark plug was quite old and worn as well 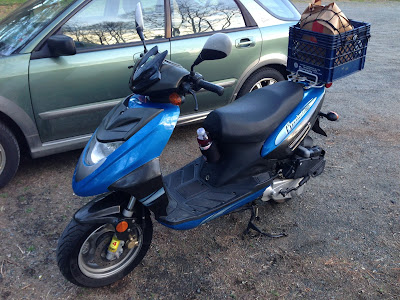 After her maiden grocery story run

In just a few days I'll be headed back to NJ for my fourth running of 3 Days at the Fair.  This time though, I'll be running as part of Team Fegy. That's right, my mom will be joining me. What does a good son get his mother for her combined mother's day / 65th birthday? 3 days of running in circles of course!

So with that, I guess I'm off to enjoy the nice weather! Vroom vroom...