NJ One-Day Recap and a Chat with DFL Ultrarunning 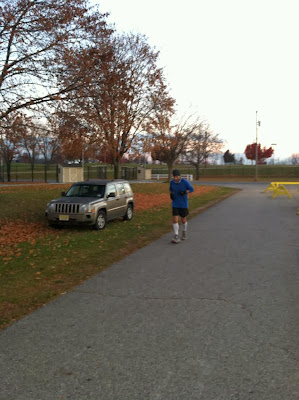 Making the turn on the 1-mile loop course

On a last minute whim, I decided to sign up for the inaugural NJ One-Day event put on by the NJ Trail Series guys.  Back in May, I decided to participate in my first timed event at the NJ "3 Days at the Fair".  I figured this 72-hour event would be a good way to prep myself for my upcoming slog across Tennessee at the Last Annual Vol State Race.  I knew I needed some long pavement training miles, but I was admittedly nervous about the idea of running a 1-mile loop continuously for 72 hours.

What transpired, was wonderfully surprising.  Not only did I enjoy running the one-mile loop, but I was introduced to the fun and vibrant NJ Trail Series running community.  One of the things that made the 72-hour event so much fun was that it was so incredibly social.  You are never more than a mile away from anyone on the course and at some point you'll either pass them, or they'll pass you.....giving you yet another chance for good conversation.  I came away from 3-days with some really fantastic memories and a whole slew of new running friends.

So.....when I saw that the race director was going to be putting on a new 24-hour race on the same course this month, I didn't hesitate to sign up.  I knew I'd get to again run alongside some great folks and that I would likely have a fun time.  I knew I wasn't trained as well as I was back in May, but I also knew it would be good to get some miles under my belt.  Additionally, I have never run a 24-hour event before, I was curious as to how many miles I might be able to cover.  More so than miles though, somewhere deep down I had always wondered how fast I could cover 100-miles.   Before arriving at the fairgrounds, I told myself that more than covering total mileage, I wanted to try as hard as possible to break 20 hours for 100 miles.  This mythical number has always seemed unreachable to me, and the closest I've ever come at a race was 21 hours 41 minutes.  Obviously the 1-mile loop is relatively flat at the NJ fairgrounds, but if there was ever a time to go for that sub 20, this was it.

I drove out Friday night and arrived at the fairgrounds after dark.  It was bitingly cold.  I set up my tent and found that I was completely alone.  It seemed everyone else opted for local motel rooms.  For the most part I stayed warm through the night, but just before sunrise I was definitely chilled as the temps dropped down into the 20's.

At 8:45 am, the 50+ runners lined up at the start.  I chatted at length with fellow Vol Stater Bill Shultz and fellow 3-days runner Dave Lettieri.  It was good catching up with all of the folks I met back in May.

At 9:00 am we set out and started making our way through the loops.  I wasn't really sure what proper pace should be, so I kept it somewhat conservative.  I basically ran the first 20 or so miles at a similar pace to that which I ran during the 72-hour event.  The daylight hours went quickly and by 4:00 pm it was already starting to get dark out.  I knew I was in for a long, cold night.  Still though, I was thoroughly enjoying myself, and my mileage was really beginning to rack up.  I covered the first 50 miles in about 8hrs 20mins, which was basically the same pace I covered 50 miles at both Tussey and Pine Creek.  I knew that this meant the wheels would likely fall off at some point, but I wasn't having too much fun to care.

As the wee hours creeped in, the temps plummeted and I focused on just trying to get through multiple loops without stopping too much for aid.  Up to this point, I found that I was stopping after almost every loop and it was costing me unnecessary time.  At some point around 3:00 am, it occurred to me that I was on pace to possibly break 20 hours for 100 miles, but the fatigue had definitely caught up to me.  I was struggling to keep the running going and by 19+ total hours I was hurting fairly badly with 95 total miles.  I pushed it hard for the next five miles and crossed the mat for 100 miles in 19 hours 54 minutes.  I had done it.  I finished 100 miles in under 20 hours.  I realize it is somewhat of a technicality as it was done during a timed event, but in my book, that still counts!

I took a long break after 100 and eventually slogged an additional 14 miles.  I walked a lot of those last miles and really wasn't too motivated to push it.  I was tired and sore to boot.  The 114 miles though was enough for 3rd place which was an unexpected surprise.  It won't get me on any US National Teams, but I was thrilled to have topped 110 for sure! 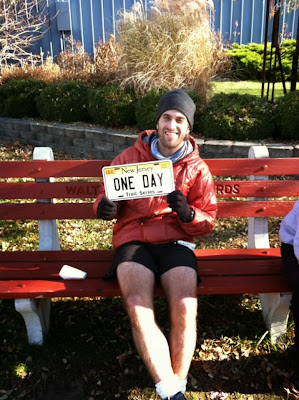 
On a side note, I recently did a 2+ hour  long podcast interview with Eric Sherman over at DFL ultrarunning.  We talked everything from Barkley, to Vol State, to Badwater, to Thru-hiking.  I had a blast chatting with Eric and I was honored to share my stories.  Here is the link to the podcast (My bit starts at 25 minutes in): 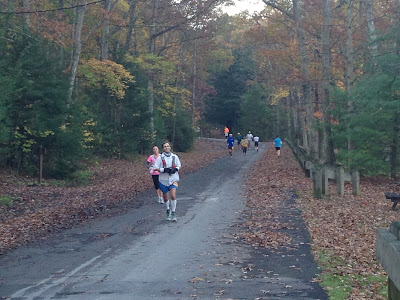 I'll admit that it's a bit strange to be sitting here in early November and not be thinking about and preparing for an upcoming deployment to Antarctica.  This will be my first year home for Christmas since 2007.  There is definitely a part of me that is saddened by this, and I will most assuredly miss another deployment to some extent, but to be honest, I am greatly looking forward to taking a season off and spending it at home.  I of course will continue to pursue opportunities to work in polar regions, as it is my career goal, but for now, I will relish in my time at home.  Truthfully, I have incredible mountains of work to finish for my thesis, so the timing is probably better this way anyway.

As it turns out, "timing" is somewhat of a theme this season.  With the combination of the sequester, the government shutdown, and plans to upgrade McMurdo station itself....science budget money has been incredibly limited for Antarctic projects.  Last week I received this message from the WAIS Divide science coordination office concerning the field camp that I just spent 5 years working at:

"Dear WAIS Divide Colleagues,
The partial government shutdown forced significant changes to the U.S. Antarctic Program’s (USAP) operations for the 2013-2014 field season. The WAIS Divide field camp will not be opened this season, and the borehole logging operations that were scheduled will be postponed until next season. Many other USAP projects were either reduced in scope, delayed for later in the season, or postponed until next season. "

While this site shutdown doesn't affect me as I was slated to remain at home this year anyway, several of my fellow colleagues and friends will now not be deploying.  Fellow grad students will have to wait on their data, and many of my friends are now out of jobs.  And this is just for WAIS Divide.  Many projects across Antarctica were canceled outright.

I've managed to maintain somewhat of a moderate running schedule although admittedly reduced.  Two weeks ago I had another go at the Tussey mOUTaiNBACK 50 and again ran fairly well.  I was certainly not in top shape and it showed.  I ran a much slower 8:27 this year (as opposed to my 7:49 in 2011).  I managed to enjoy myself much more though, and on a tougher course.  It was a beautiful day for it, and I had fun catching up with friends and fellow runners both at the race and while volunteering at the pre-race packet pick-up.

I had quite a bit of trouble in the early miles with what i'll call "intestinal issues".  I probably lost 10-15 minutes in the race sitting on toilets.  By mile 20 though I was pretty cleared up and ran comfortably through to the finish.  I could tell my legs didn't have enough long training miles under them though as they became sore and fatigued much earlier than normal.  In the end, I was quite content with my time and the fun day at my local home-town ultra. 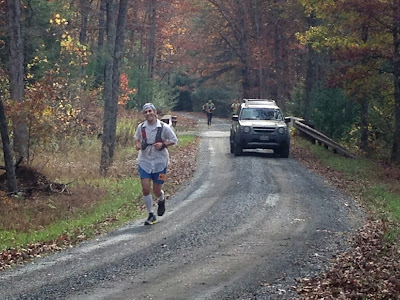 For the month of November I've decided to participate in a fun RED-FAM (Run every day, for a month) challenge proposed by fellow vol-stater and barker Carl Laniak.  I'm hoping that by committing myself to running every day this month, I'll shape myself up a bit and keep myself from getting soft.  Additionally, I've tacked on a sub-challenge of not-shaving either.  So by Nov 30th, I hope to be a leaned-up, scruffy running machine!

NJ ONE DAY
My last official ultra of the season is this upcoming weekend.  I will again make a visit to Augusta NJ for a 24-hour festival.  In the exact same vain as the Three-Days event I ran back in May, the One-Day features the identical 1-mile loop around the fair grounds.  I will employ a similar setup and strategy and just try to keep moving as much as a I can without getting stupid.  I hope to get at least 100 miles, but as long as I have fun, I'll settle for whatever.

Otherwise, things are less-than-exciting lately.  Lots of data analysis for school and manuscript writing and editing.  I even had to get a root canal done on a bothersome tooth last week (something I definitely don't recommend...yuck!).

Next week I head to Denver for a quick lab session and will get some of my last samples prepared for my thesis.  Crazy to think that things are starting to wrap up.

This will be the first year I'm home for my birthday, Thanksgiving, and Christmas in 5 years.  All I want for a gift, other than finally spending the holidays at home....is to get into Hardrock! :-)  5th times the charm right?