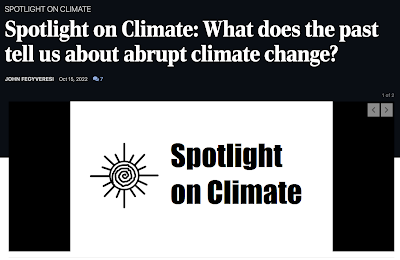 This past weekend I published a short opinion piece in our local newspaper here in Arizona, via a monthly segment titled "Spotlight on Climate". The theme of this article was mostly related to "abrupt" climate changes, citing a few examples of abrupt climate changes in the past, the implications of those changes, as well as our present-day climate crisis.

In the spirit of full disclosure, I would say that this specific article is notably different than the initial article I wanted to write, but wasn't received as well by the AZ Sun staff (for fear "It wouldn't be as well-understood by the general public").

While I definitely agree that the topic of abrupt climate change is incredibly important (and relevant), I also strongly believe that the theme of my original article is actually more important for discussion at this point in our climate crisis. In all of my discussions with people over the past few years, one of the most common misconceptions that I come across, is that "Sometimes, climate just changes...and perhaps that's what's happening now". Putting aside the physics and thermodynamics of how greenhouse gases directly affect climate, I think it's REALLY important, and incumbent on all climate scientists to explain that....NO...climate does not, nor will it ever, "Just change" whimsically. Climate changes are ALWAYS driven by some forcing or "push" on the system. That push may be natural, or may be human-caused, but the point is that there is ALWAYS a push. Our climate system doesn't have moods, nor is it whimsical. It doesn't just decide to become warmer or cooler.

I find that it is paramount that this misconception be explained, corrected, and ultimately cleared from the public understanding and lexicon.  With that said, I'm attaching below my original article draft:

As our planet was emerging from the last ice age, something remarkable happened. As were slowly warming over thousands of years, average temperatures suddenly plummeted by as much as 18 degrees. What is particularly significant, is that this massive and abrupt change in the climate system, known as the Younger-Dryas stadial, happened over just a few decades. About a thousand years later, as the planet finally began to warm again, there was yet another abrupt shift. This time however, the Earth actually warmed almost 13 degrees in less than 10 years! These abrupt shifts had profound impacts on the environment and on the hunter gatherer settlements at the time. A similar, although less pronounced abrupt climate change also occurred about 4200 years ago that led to large-scale aridification in parts of the world and was a primary driver for the collapse of multiple civilizations across Africa and Asia. As we peer back through Earth’s climate history, we find numerous examples like these.

Most would agree that the Earth’s climate system is incredibly complicated and dynamic, and that there are countless mechanisms and interactions at play. Scientists are able to collect and examine past climate data by looking through historical records in the recent past, and then further back through time by tapping into well-established archives known as proxies. These proxies, such as ice cores, tree rings, or corals, are able to capture details of the climate, and then lock them away much like fossil records. What we’ve discovered through examination of these proxy records, is that our past climate is not only fascinating, but that it has changed quite dramatically, and on countless occasions.

It is true that there is a fair amount of inertia (or stability) within our climate system, meaning that when global average temperatures do change, they tend to change somewhat slowly. Sometimes things trend warmer, sometimes colder, but sometimes, and despite that inertia, our climate can change abruptly. Regardless of the changes however, there is always one thing they all have in common. They are all caused by something. So, while the climate system is undoubtedly complex, what it is not, is whimsical. Earth’s climate never just changes entirely through random chance. There must always be a push on the system, or what is known as a “forcing”, in order for global temperatures to rise or fall. That forcing could be natural, it could be related to human activity, but regardless, climate has not, nor will it ever change, without some forcing acting upon it.

There are many natural forcings that scientists understand quite well, like changes in Earth’s orbit, or the energy we receive from our sun. We are also getting better at understanding the smaller variations in our climate system, such as the behavior of the jet stream, ocean currents, volcanic activity, or El Niño patterns. Today, many scientists are focused on the human-related forcings, such as increases in our fossil fuel carbon emissions. We now have vast and complicated global climate models that carry within them the complex equations and relationships tied to all of these forcings. When we look at the results we get from these global models, they are all telling us the same thing. Much like having multiple doctors all give a patient the same diagnosis, the more climate models that agree with each other, the more confident we can all be that they are giving us the right answers.

Today, governments, organizations, and peoples of the world are all interested in where our current climate is headed. If we do believe that the models are giving us the right answers, and that the Earth will continue to warm several degrees before the end of this century, should we be worried? Is it really going to be that impactful to our massive and complex climate system given its inertia? Well what we’ve learned from all of these studies of the past, is that climate changes, even small or subtle ones, can have enormous impacts on our planet. In many cases, the more-rapid changes can actually lead to cascading feedback effects and upset systems that may be in a delicate balance.

In the case of the Younger Dryas event, we know it was caused by a large shift in ocean circulation and salinity that ultimately pushed on the climate system. Today, we’ve already warmed over 1°F in just the past few decades, and knowing what we now do about how even small abrupt climate changes have impacted our world in the past, it seems only fair that we should all be paying a little more attention and learning from the past.