A Spring Update, and Some New Adventures 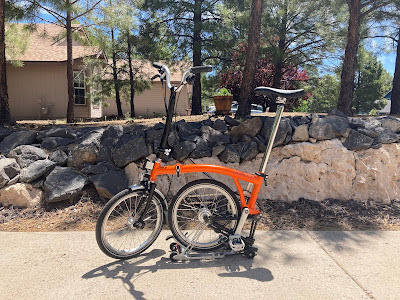 So what the heck has happened to this web journal John? Where've you been??

Well, it's really not that complicated. Life gets busy, and priorities shift. More simply I would say that for the first time in my life, I am genuinely sharing my home and therefore have spent what free time I do have, enjoying my now-shared life. And frankly, it has been wonderful.

Of course my new faculty position at Northern Arizona University, combined with my life and responsibilities here as a new homeowner in Flagstaff has pulled a considerable amount of what otherwise may have been "free time".

In addition, I've picked up a few new "toys" as of late (perhaps indicative of an age-related crisis), and found myself spending time enjoying those things more as well.

So...ultimately, I'm not running as much, nor writing as much...but I do feel that my life has genuinely found itself in a place of sincere contentment. Sure I could post detailed entries here about the new restored barnwood table we had built for our home, or the new garden boxes we've installed out back, or the various adventures and mishaps of Molly our dog (who has settled in nicely by the way)....but honestly, I'd rather just live in those moments and haven't really felt the need to post lengthy recaps about things like that (save maybe a couple of quick pictures below)... 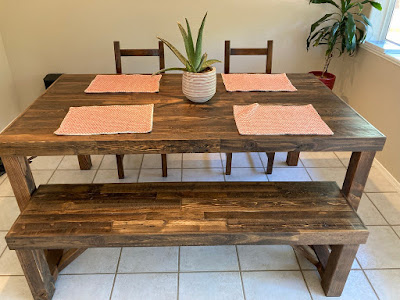 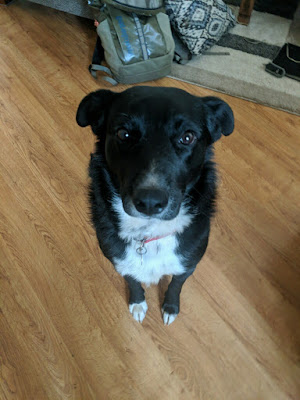 Molly being her adorable self

Over the years I've had many friends tell me that they enjoy reading my entries on this web journal of mine, but for where I am in my life now, I guess I'd like to consider myself as in somewhat of an "emeritus" status with regards to this site. I'd like to continue to post a couple of entries now and then, as well as my "year-end" posts, but am now likely beyond the days of posting about my mileage preparation for a random 50k ultra event, or a race report from a local 10k. I wrote here about things that brought me joy, and as a way for me to somehow capture the memories in print. But as I've aged, that desire has faded and I have found solace in simply living the moments as they happen. Perhaps that sentiment will shift back to more like it once was. A memory sine-wave as it were.

At any rate....I did want to share some fun news about another new "toy" that I hope will bring some new joy into my life.

Nine years ago when I ran the Barkley, I met a fantastic runner from Belgium named Wouter. He's also in the documentary "The Race That Eats Its Young". While we were chatting one day, I became fascinated by the bike he brought with him from Belgium. It was a British made fold-able bike called a "Brompton". What blew my mind about the bike, was just how small it was when folded up, and the fact that he was able to bring it on the plane with him as his "carry on". It even fit in the overhead bin! When he got off the plane in Knoxville, he unfolded it, strapped his luggage to it, and rode in the 20+ miles to Frozen Head State park for the race. I told myself that one day, I wanted to get one for commuting and various travel. 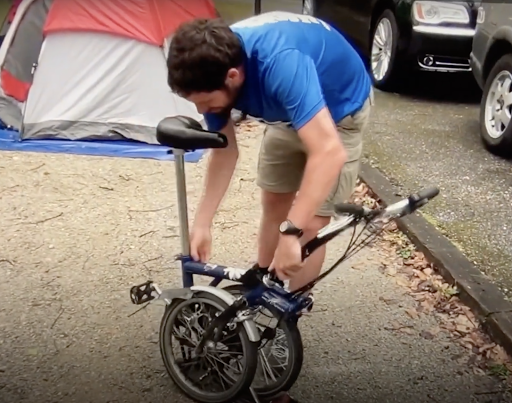 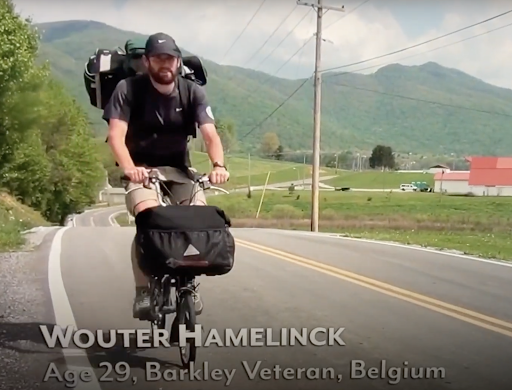 Years went by, and after test riding a couple of Bromptons in Boston, I finally picked one up relatively cheap down in Phoenix two weeks ago. It helped that I sold my old commuter bike as well to help offset the cost.

I've been using the Brompton now to commute into work daily and can fold it up and store it under my desk in my office, or under my table in the coffee shop. I have been absolutely and completely enjoying my time on it.

For those curious, it is an H6R model with a -12% gearing (44 tooth chain ring). This just means it has 6 speeds, a gearing configuration meant for hilly terrain, a rear rack, and slightly higher handlebars. It's incredibly comfortable and I hope we share many future miles and adventures together. 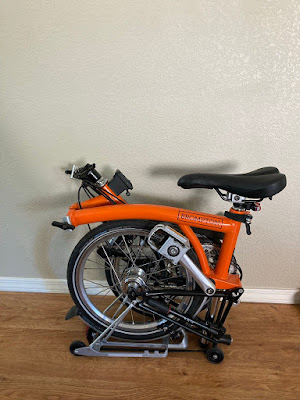 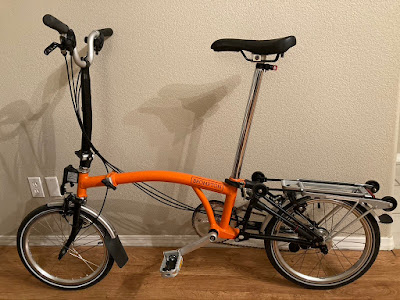 As far as my other 2-wheeled adventures, there have been MANY. I have taken the Royal Enfield Himalayan out on countless rides on just about every terrain possible. I've wiped out a few times, had some close calls on rocky surfaces, and explored some ridiculous places around town.....so pretty much the exact types of experiences I had hoped for and for which I ultimately bought it.

In a few short weeks, I'll take the Himalayan up to the San Juans of Colorado for a true camping and adventuring-style week. Whatever happens, I'm sure it'll be memorable. 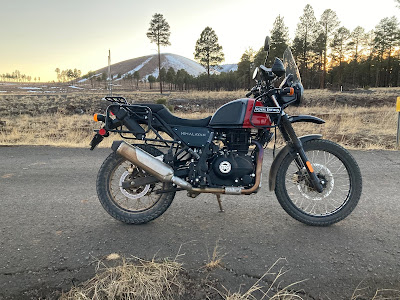 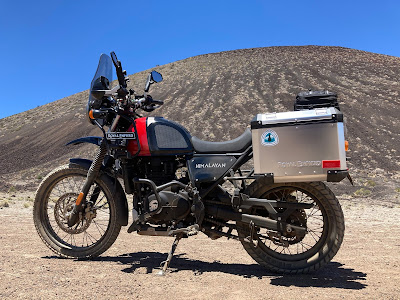 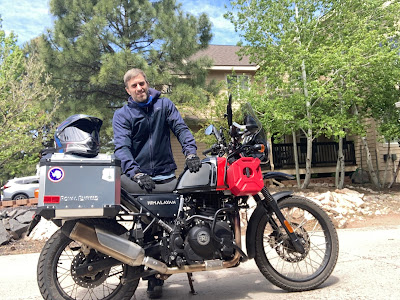 Ready for my big Colorado Adventure 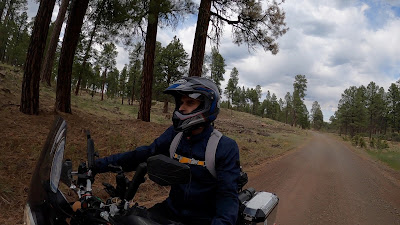 Exploring some back roads 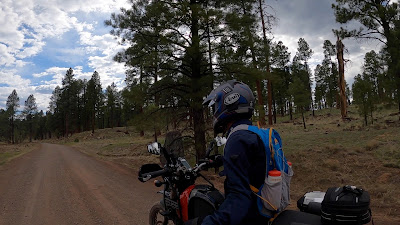 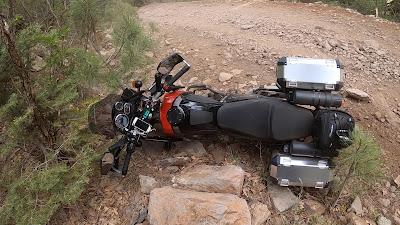 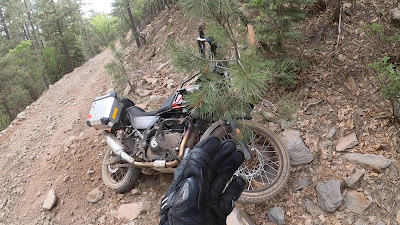 Another wee mishap
Last week I ran the 46-mile Flagstaff Loop trail and had a jolly old time circumnavigating my new home here in Flagstaff. It also was a test to see if I'd be in shape to even just finish the Bighorn 100 (which is now next week!). I did fine and feel much better about trudging my way through 100 miles in the woods of Wyoming. 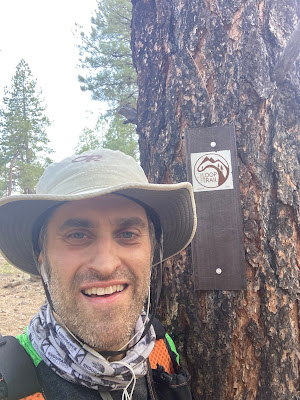 On the Flagstaff Loop Trail

...And that's about all I have to share at the moment. There have been numerous other life adventures these past few months (including another R2R2R)....but I think I'll stop this post here. I keep looking out the window and seeing the perfect weather out there and feel the need to get out for an evening run. 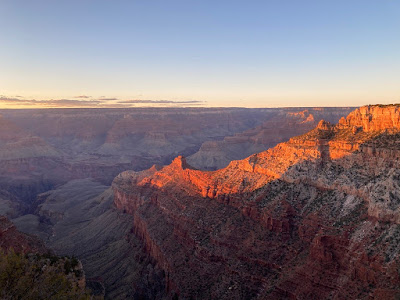 Grand Canyon from the South Rim
(from my 2nd R2R2R)

So with that said, take care everyone, and be safe out there.