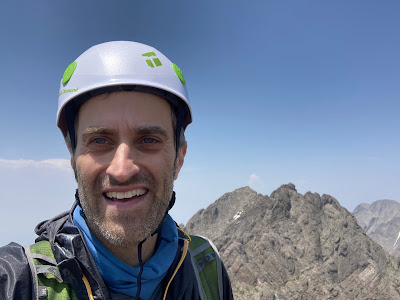 I just returned from a moto-touring trip to Colorado, where I spent over a week riding around multiple landscapes and mountains on the new Royal Enfield Himalayan, camping at high altitude, running an aid station at the Hardrock Hundred, and of course bagging 14ers. Rather than fill up this entire post with all of the details of this trip, I figured I'd simply focus on one specific part for this post: The Crestones. 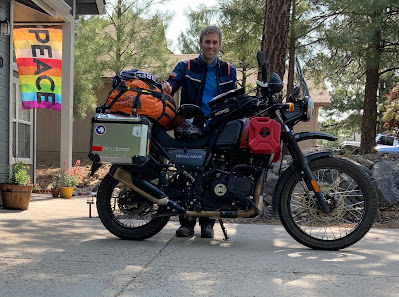 All loaded up and ready to go! 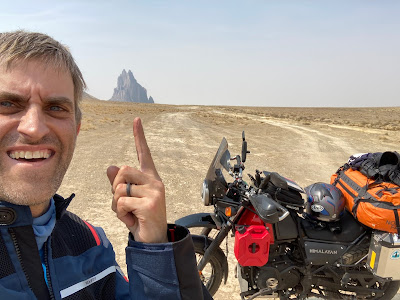 At Shiprock on my way to Colorado

As many of you know, I'm on multi-year quest to summit all 58 officially recognized 14er peaks of Colorado. Technically there are more summits over 14,000, but the generally accepted list includes 58. Before my trip to Colorado last week, I was sitting at 49/58 summits. My goal on this trip was to skirt over to the Sangre de Cristo Mountains, and finally finish off the 2 Crestone Peaks, thereby finishing off all of my remaining peaks outside of the Elk Range.

Let me start by saying that this trip was successful, but not without some hiccups. Of the 51 summits I have now completed, I think it's no exaggeration to say that these two peaks were the hardest I've done to date...specifically Crestone Needle. There was legitimate class 4 pitches on that climb, and very-real exposure. I nearly turned around at the crux of the route for failure to find a safe way to continue, but ultimately found a way to traverse it after much scouting. 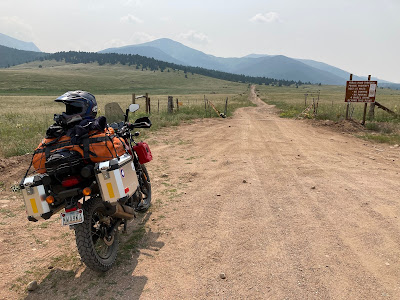 At the lower trailhead for the Crestones

I wanted to share my experience for any of you thinking of doing these routes. I chose to hike up to the Colony Lakes area and camp the night before, giving me plenty of time to make both summits. I also chose not to take the bike up to the upper trailhead. I probably could have, but the road was a little more technical than I wanted to attempt with a fully loaded bike, and I know it was also likely to rain, making the descent back down the road the next day potentially muddy and loose. Lastly, I also made the decision to hike each peak independently and not attempt the "Traverse". I had no intention of doing a class 5 traverse that is known for being one of the deadliest 14er routes in Colorado. For anyone thinking of doing these peaks like I did, I highly recommend downloading all of the 14ers.com app data and photos....and be sure to also bring an inReach or Spot device. I shared my route with family and had an SoS button should I need it (https://share.garmin.com/johnfegy)

The route up to Colony Lakes is uneventful and all class 1. I found a campsite just short of the primary lower lake area at about 11,600 feet. I was set up by 7 pm and falling asleep by 9.

I was up at 5 am to start my day and the hike up to the base of Broken Hand Pass was all class 1 and 2 easy hiking and scrambling. Starting at the base of the Broken Hand Pass Gully, you finally hit the first legitimate class 3 scrambling. All totally doable with a few moves requiring all-fours. No real notable exposure in here though. From the summit down to the backside valley and lake, it's all easy class 1 and 2 descending...and a subsequent easy hike over to the base of the major "red" gully up to Crestone Peak. For about 1600 feet, you then slowly work your way up class 3 moves to the final upper saddle of Crestone. This section took me over 90 minutes. From the upper Saddle over to the Summit, there are a few exposed class 3 moves, but nothing too sketchy. Still, you have to be slow, deliberate, and focused. I was never genuinely scared, but was definitely alert and focused. The descent back down to the lake went perfectly with no major route-finding or other issues. 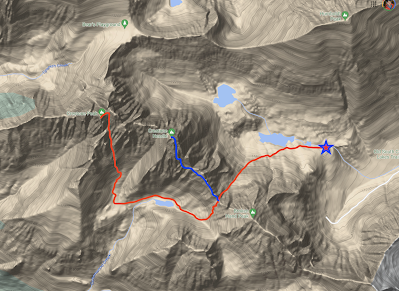 I made my way back over to Broken Hand Pass to begin the route up to Crestone Needle, starting at about 10:30 am. The first 1/3 of the route was all class 1 and 2, fairly easy work. That all changed at the start of the first gully however. This ascent was considerably steeper and more technical than the gullies on Crestone Peak. There were a couple of spots that took genuine effort to get up...and I would consider these "difficult class 3". There were also a couple spots that did present some notable exposure.

At the crux of the route, there is a distinct "crack" in the gully known as the "dihedral". At this point, photos show where you need to "hop" across the crack and ascend the other side. Despite all of the route descriptions I had, and photos showing the correct place to make this move, I could not find the right spot that I felt safe/comfortable with. The scene just didn't match what the photos showed. I found a spot that I thought looked "ok" but if I committed to it, and couldn't make it work, I could have become legitimately stuck. I tried to find an alternate place to cross, but just couldn't find anything I was good with. Ironically, by the looks of things, I had determined that in the return direction, it would actually be much easier to cross as the lower side of the "crack" was much more climbable. I essentially pulled the plug and began to down climb, when I noticed a spot further down that would allow to get across easily, but would present a steep class 4 pitch to meet up with the spot higher up where I was "supposed to cross". I decided to give it a go and it was way harder than I was expecting. There were a couple moments on that pitch where I was genuinely scared and being very careful to find strong and stable hand holds. A fall from this pitch would have not ended well. When I made it to the spot where I was supposed to cross, I still had class 4 exposed pitches to make it up to finish out that gully. It was about then that I realized I might be in over my head.

I made it to the top of that pitch, and had to then hop over to the 2nd gully. This one was also quite technical but seemed considerably less exposed. I slowly made my way to the top of that gully and topped out at a saddle. From there the route presented a series of steep class 3 scrambly moves, that were also quite exposed. I timidly made my way along this narrow corridor, and just about when I was mentally at my limit, I topped out on the summit block. This entire experience was by far the most stressful and mentally exhausting of any summit I've done (granted, I still have Pyramid and Capital to do...which are notoriously difficult).

I didn't celebrate on the summit, but rather stressed about the down climb. I knew it would be tough, so focused on simply getting through each section as it came, knowing the crux might present a real problem. Thankfully, as I determined earlier, the crux proved much easier on the descent, and I was able to cross at the correct place. One through that gully and in sight of the Pass, I knew the worst was over. I was back at my campsite safely by about 2 pm.

All went well packing up my gear and I began the 5+ mile class 1 forest road walk back to the motorcycle hoping to quickly re-sort my gear at the bike, and get on the road to the next town over for a motel room. Well....it didn't quite work out that way. About 2 miles up from the bike, I got hit by a massive Colorado Monsoon Storm with lightning, pea-sized hail, and torrents of rain. With no car to get into at the trail head, I made the decision to pitch my tent in the rain, and wait out the storm. I was borderline hypothermic, so this was the right call. After about an hour of heavy rain and hail, it finally let up and I was able to get into dry/warm clothes and sort all of my gear properly. I was back on the road by 6pm where I was able to safely make my way to motel room a few hours away.  It definitely was an interesting way to end the day, but I'm glad with the success I had on the mountains.

If you plan to do the Crestones, please just take them slowly, and carry all of the route beta with you. I had GPX routes loaded on to my Gaia app on my phone as well, which did help in some of the tricky spots.

I have 7 peaks left now, all in the Elk Range. These are all also quite difficult peaks and will take a lot of planning. I will likely start with Castle and Conundrum and work my way up to the Maroon Peaks and of course, Snowmass and Capital.

That's it for now. I did record quite a bit of video footage of my day in the mountains if you're interested in some more of the intimate details from the day.

Video highlights from my day on the Crestones 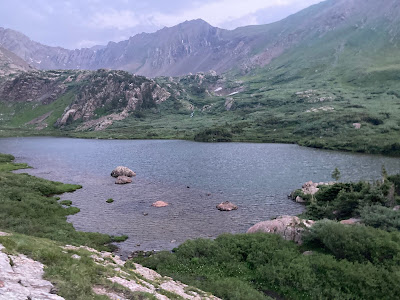 Morning view from the lakes 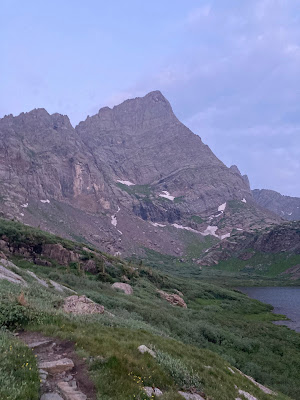 Crestone Needle seen from the Lakes 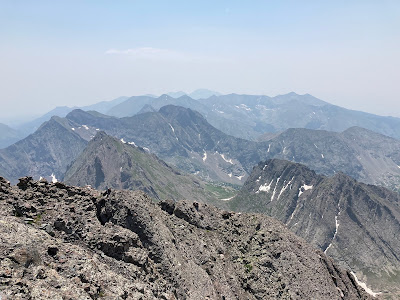 On the Summit of Crestone Peak

On the Summit of Crestone Needle
Posted by Lakewood at 3:47 PM